This artist's concept shows a glowing patch of ultraviolet light near Saturn's north pole that occurs at the "footprint" of the magnetic connection between Saturn and its moon Enceladus. Image credit: NASA/JPL/JHUAPL/University of Colorado/Central Arizona College/SSI
› Full image and caption
› Radio noise video
› Enceladus animation 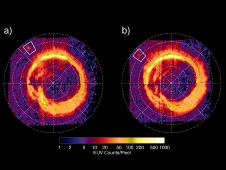 NASA's Cassini spacecraft has spotted a glowing patch of ultraviolet light near Saturn's north pole that marks the presence of an electrical circuit that connects Saturn with its moon Enceladus. Image credit: NASA/JPL/University of Colorado/Central Arizona College
› Full image and caption

PASADENA, Calif. -- NASA is releasing the first images and sounds of an electrical connection between Saturn and one of its moons, Enceladus. The data collected by the agency's Cassini spacecraft enable scientists to improve their understanding of the complex web of interaction between the planet and its numerous moons. The results of the data analysis are published in the journals Nature and Geophysical Research Letters.

Scientists previously theorized an electrical circuit should exist at Saturn. After analyzing data that Cassini collected in 2008, scientists saw a glowing patch of ultraviolet light emissions near Saturn's north pole that marked the presence of a circuit, even though the moon is 240,000 kilometers (150,000 miles) away from the planet.

"The footprint discovery at Saturn is one of the most important fields and particle revelations from Cassini and ultimately may help us understand Saturn's strange magnetic field," said Marcia Burton, a Cassini fields and particles scientist at NASA's Jet Propulsion Laboratory in Pasadena, Calif. "It gives us the first visual connection between Saturn and one of its moons."

The auroral footprint measures approximately 1,200 kilometers (750 miles) by less than 400 kilometers (250 miles), covering an area comparable to California or Sweden. At its brightest, the footprint shone with an ultraviolet light intensity far less than Saturn's polar auroral rings, but comparable to the faintest aurora visible at Earth without a telescope in the visible light spectrum. Scientists have not found a matching footprint at the southern end of the magnetic field line. Jupiter's active moon Io creates glowing footprints near Jupiter's north and south poles, so scientists suspected there was an analogous electrical connection between Saturn and Enceladus. It is the only known active moon in the Saturn system with jets spraying water vapor and organic particles into space. For years, scientists used space telescopes to search Saturn's poles for footprints, but they found none.

"Cassini fields and particles instruments found particle beams aligned with Saturn's magnetic field near Enceladus, and scientists started asking if we could see an expected ultraviolet spot at the end of the magnetic field line on Saturn," said Wayne Pryor, a lead author of the Nature study released today, and Cassini co-investigator at Central Arizona College in Coolidge, Ariz. "We were delighted to find the glow close to the 'bulls-eye' at the center of our target."

In 2008, Cassini detected a beam of energetic protons near Enceladus aligned with the magnetic field and field-aligned electron beams. A team of scientists analyzed the data and concluded the electron beams had sufficient energy flux to generate a detectable level of auroral emission at Saturn. A few weeks later, Cassini captured images of an auroral footprint in Saturn's northern hemisphere. In 2009, a group of Cassini scientists led by Donald Gurnett at the University of Iowa in Iowa City, detected more complementary signals near Enceladus consistent with currents that travel from the moon to the top of Saturn's atmosphere, including a hiss-like sound from the magnetic connection. That paper was published in March in Geophysical Research Letters.

The water cloud above the Enceladus jets produces a massive, ionized "plasma" cloud through its interactions with the magnetic bubble around Saturn. This cloud disturbs the magnetic field lines. The footprint appears to flicker in these new data, so the rate at which Enceladus is spewing particles may vary.

"The new data are adding fuel to the fire of some long-standing debates about this active little moon," said Abigail Rymer, the other lead author of the Nature study and a Cassini team scientist based at the Johns Hopkins University Applied Physics Laboratory in Laurel, Md. "Scientists have been wondering whether the venting rate is variable, and these new data suggest that it is."

The Cassini-Huygens mission is a cooperative project of NASA, the European Space Agency and the Italian Space Agency. JPL, a division of the California Institute of Technology in Pasadena, manages the mission for NASA's Science Mission Directorate in Washington. The Cassini orbiter and several of its instruments were designed, developed and assembled at JPL.

To see a video and hear the sounds of the electrical connection, and to get more information about the Cassini mission, visit: http://www.nasa.gov/cassini and http://saturn.jpl.nasa.gov.