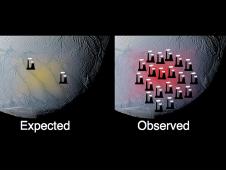 PASADENA, Calif. – Heat output from the south polar region of Saturn's moon Enceladus is much greater than was previously thought possible, according to a new analysis of data collected by NASA's Cassini spacecraft. The study was published in the Journal of Geophysical Research on March 4.

Data from Cassini's composite infrared spectrometer of Enceladus' south polar terrain, which is marked by linear fissures, indicate that the internal heat-generated power is about 15.8 gigawatts, approximately 2.6 times the power output of all the hot springs in the Yellowstone region, or comparable to 20 coal-fueled power stations. This is more than an order of magnitude higher than scientists had predicted, according to Carly Howett, the lead author of study, who is a postdoctoral researcher at Southwest Research Institute in Boulder, Colo., and a composite infrared spectrometer science team member.

"The mechanism capable of producing the much higher observed internal power remains a mystery and challenges the currently proposed models of long-term heat production," said Howett.

It has been known since 2005 that Enceladus' south polar terrain is geologically active and the activity is centered on four roughly parallel linear trenches, 130 kilometers (80 miles) long and about 2 kilometers (1 mile) wide, informally known as the "tiger stripes." Cassini also found that these fissures eject great plumes of ice particles and water vapor continually into space. These trenches have elevated temperatures due to heat leaking out of Enceladus' interior.

A 2007 study predicted the internal heat of Enceladus, if principally generated by tidal forces arising from the orbital resonance between Enceladus and another moon, Dione, could be no greater than 1.1 gigawatts averaged over the long term. Heating from natural radioactivity inside Enceladus would add another 0.3 gigawatts.

A possible explanation of the high heat flow observed is that Enceladus' orbital relationship to Saturn and Dione changes with time, allowing periods of more intensive tidal heating, separated by more quiescent periods. This means Cassini might be lucky enough to be seeing Enceladus when it's unusually active.

Recently, scientists studying ice particles ejected from the plumes discovered that some of the particles are salt-rich, and are probably frozen droplets from a saltwater ocean in contact with Enceladus' mineral-rich rocky core. The presence of a subsurface ocean, or perhaps a south polar sea between the moon's outer ice shell and its rocky interior would increase the efficiency of the tidal heating by allowing greater tidal distortions of the ice shell.

"The possibility of liquid water, a tidal energy source and the observation of organic (carbon-rich) chemicals in the plume of Enceladus make the satellite a site of strong astrobiological interest," Howett said.

The Cassini-Huygens mission is a cooperative project of NASA, the European Space Agency and the Italian Space Agency. NASA's Jet Propulsion Laboratory, Pasadena, Calif., a division of the California Institute of Technology in Pasadena, manages the mission for NASA's Science Mission Directorate, Washington, D.C. The Cassini orbiter was designed, developed and assembled at JPL. The CIRS team is based at NASA's Goddard Space Flight Center in Greenbelt, Md., where the instrument was built.