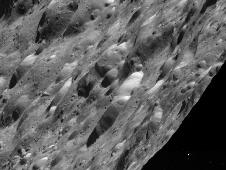 This raw image obtained by NASA's Cassini spacecraft of Saturn's moon Rhea shows craters in an area between day and night on the icy moon. Image credit: NASA/JPL/SSI
› Full image and caption 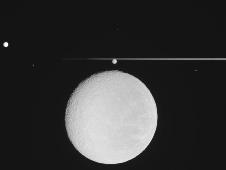 Pictures of the Rhea surface taken around the time of closest approach at 4:53 a.m. UTC on Jan. 11, 2011, which was 8:53 p.m. PST, Jan. 10, show shadowy craters at a low sun angle. A portrait of bright, icy Rhea also captures Saturn's rings and three other moons clearly visible in the background.

Images obtained by Cassini's imaging science subsystem show an old, inert surface saturated with craters, just like the oldest parts of Earth's moon. But there appear to be some straight faults that were formed early in Rhea's history, which never developed the full-blown activity seen on another of Saturn's moons, Enceladus.

The flyby of Rhea also presented scientists with their best available chance to study how often tiny meteoroids bombard the moon's surface. Scientists are now sifting through data collected on the close flyby by the cosmic dust analyzer and the radio and plasma wave science instrument. They will use the data to deduce how often objects outside the Saturn system contaminate Saturn's rings, and to improve estimates of how old the rings are.

Scientists using Cassini's fields and particles instruments are also looking through their data to see if they learned more about Rhea's very thin oxygen-and-carbon-dioxide atmosphere and the interaction between Rhea and the particles within Saturn's magnetosphere, the magnetic bubble around the planet.

At closest approach, Cassini passed within about 69 kilometers (43 miles) of the surface.

The Cassini-Huygens mission is a cooperative project of NASA, the European Space Agency and the Italian Space Agency. NASA's Jet Propulsion Laboratory, Pasadena, Calif., a division of the California Institute of Technology in Pasadena, manages the mission for NASA's Science Mission Directorate, Washington, D.C. The Cassini orbiter was designed, developed and assembled at JPL.