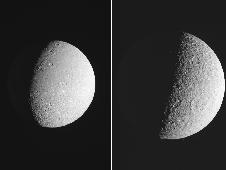 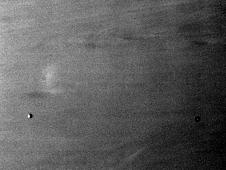 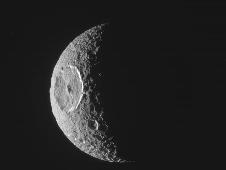 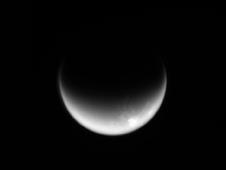 Taking a long-weekend road trip, NASA's Cassini spacecraft successfully glided near nine Saturnian moons, sending back a stream of raw images as mementos of its adrenaline-fueled expedition. The spacecraft sent back particularly intriguing images of the moons Dione and Rhea.

The Dione and Rhea pictures are the highest-resolution views yet of parts of their surfaces. The views of the southern part of Dione's leading hemisphere (the part of the moon that faces forward in its orbit around Saturn) and the equatorial region of Rhea's leading hemisphere are more detailed than the last time we saw these terrains with NASA's Voyager spacecraft in the early 1980s.

Of the five big icy moons of Saturn, Dione and Rhea are often considered a pair because they orbit close to each other, are darker than the others, and exhibit similar patterns of light reflecting off them. These new images, however, highlight the differences between these sister moons.

Both images show similar geographic regions on each satellite. However, scientists can identify differences in geological histories of the two bodies from differences in the numbers and sizes of visible craters on their surfaces. The number and size of craters on a body's surface help indicate the age of that surface – the more craters there are and the larger they are, the older the surface is.

Rhea, for example, shows ancient, intense bombardments throughout this region. However, the same region of Dione is divided into distinct areas that exhibit variations in the number and size of preserved craters. In particular, while parts of Dione are heavily cratered like Rhea, there are other areas covered by relatively smooth plains. Those areas have many small craters, but few large impact scars, which indicates that they are geologically younger than the heavily cratered areas. The smooth plains must have been resurfaced at some point in Dione's past -- an event that seems to be missing from Rhea's geological history on this side of the moon.

Images of the moon Mimas, captured just before it went into shadow behind Saturn, will be compared to thermal maps made earlier this year that showed an unexpected "Pac-Man" heat pattern. (See http://www.nasa.gov/mission_pages/cassini/whycassini/cassini20100329.html for more details.)

Cassini also caught a picture of the tiny, 4-kilometer-wide (3-mile-wide) moon Pallene, in front of the planet Saturn, which is more than 120,000 kilometers (75,000 miles) wide at its equator.

Cassini's elliptical orbital pattern around Saturn means it can target moons for flybys about once or twice a month. The flybys on this particular Cassini road trip were "non-targeted" flybys, meaning navigators did not refine Cassini's path to fly over particular points on each moon.

Scientists decided in advance which observations they wanted to make while the spacecraft was cruising past all the moons. They chose to obtain images of Titan, Mimas, Pallene, Dione and Rhea. They also obtained thermal scans of Mimas, Dione and Rhea.

The Cassini-Huygens mission is a cooperative project of NASA, the European Space Agency and the Italian Space Agency. The Jet Propulsion Laboratory manages the project for NASA's Science Mission Directorate in Washington. The Cassini orbiter was designed, developed and assembled at JPL. The imaging operations center is based at the Space Science Institute in Boulder, Colo. More Cassini information is available, at http://www.nasa.gov/cassini and http://saturn.jpl.nasa.gov.