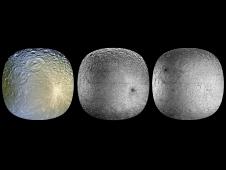 These three views of Saturn's moon Rhea were made from data obtained by NASA's Cassini spacecraft. Image credit: NASA/JPL/SSI/LPI
› Full image and caption 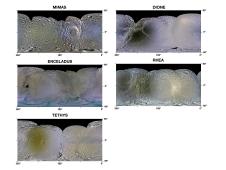 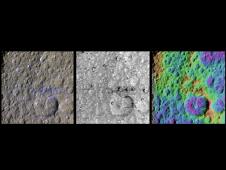 These three enhanced-color views of an equatorial region on Saturn's moon Rhea were made from data obtained by NASA's Cassini spacecraft. Image credit: NASA/JPL/SSI/LPI
› Full image and caption 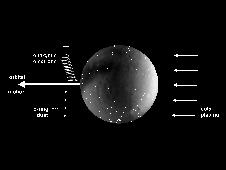 This schematic graphic illustrates the bombardments that lead to colorful splotches and bands on the surfaces of several icy moons of Saturn. Image credit: NASA/JPL/SSI/LPI
› Full image and caption 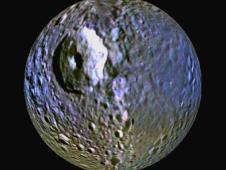 This enhanced-color view of Saturn's moon Mimas was made from images obtained by NASA's Cassini spacecraft. Image credit: NASA/JPL/SSI/LPI
› Full image and caption

PASADENA, Calif. – Scientists using data from NASA's Cassini spacecraft have learned that distinctive, colorful bands and splotches embellish the surfaces of Saturn's inner, mid-size moons. The reddish and bluish hues on the icy surfaces of Mimas, Enceladus, Tethys, Dione and Rhea appear to be the aftermath of bombardments large and small.

A paper based on the findings was recently published online in the journal Icarus. In it, scientists describe prominent global patterns that trace the trade routes for material exchange between the moons themselves, an outer ring of Saturn known as the E ring and the planet's magnetic environment. The finding may explain the mysterious Pac-Man thermal pattern on Mimas, found earlier this year by Cassini scientists, said lead author Paul Schenk, who was funded by a Cassini data analysis program grant and is based at the Lunar and Planetary Institute in Houston.

"The beauty of it all is how the satellites behave as a family, recording similar processes and events on their surfaces, each in its own unique way," Schenk said. "I don't think anyone expected that electrons would leave such obvious fingerprints on planetary surfaces, but we see it on several moons, including Mimas, which was once thought to be rather bland."

Schenk and colleagues processed raw images obtained by Cassini's imaging cameras from 2004 to 2009 to produce new, high-resolution global color maps of these five moons. The new maps used camera frames shot through visible-light, ultraviolet and infrared filters which were processed to enhance our views of these moons beyond what could be seen by the human eye.

"The richness of the Cassini data set – visible images, infrared images, ultraviolet images, measurements of the radiation belts – is such that we can finally 'paint a picture' as to how the satellites themselves are 'painted,'" said William B. McKinnon, one of six co-authors on the paper. McKinnon is based at Washington University in St. Louis and was also funded by the Cassini data analysis program.

Icy material sprayed by Enceladus, which makes up the misty E ring, appears to leave a brighter, blue signature. The pattern of bluish material on Enceladus, for example, indicates that the moon is covered by the fallback of its own "breath."

Enceladean spray also appears to splatter the parts of Tethys, Dione and Rhea that run into the spray head-on in their orbits around Saturn. But scientists are still puzzling over why the Enceladean frost on the leading hemisphere of these moons bears a coral-colored, rather than bluish, tint.

On Tethys, Dione and Rhea, darker, rust-colored, reddish hues paint the entire trailing hemisphere, or the side that faces backward in the orbit around Saturn. The reddish hues are thought to be caused by tiny particle strikes from circulating plasma, a gas-like state of matter so hot that atoms split into an ion and an electron, in Saturn's magnetic environment. Tiny, iron-rich "nanoparticles" may also be involved, based on earlier analyses by the Cassini visual and infrared mapping spectrometer team.

Mimas is also touched by the tint of Enceladean spray, but it appears on the trailing side of Mimas. This probably occurs because it orbits inside the path of Enceladus, or closer to Saturn, than Tethys, Dione and Rhea.

In addition, Mimas and Tethys sport a dark, bluish band. The bands match patterns one might expect if the surface were being irradiated by high-energy electrons that drift in a direction opposite to the flow of plasma in the magnetic bubble around Saturn. Scientists are still figuring out exactly what is happening, but the electrons appear to be zapping the Mimas surface in a way that matches the Pac-Man thermal pattern detected by Cassini's composite infrared spectrometer, Schenk said.

Schenk and colleagues also found a unique chain of bluish splotches along the equator of Rhea that re-open the question of whether Rhea ever had a ring around it. The splotches do not seem related to Enceladus, but rather appear where fresh, bluish ice has been exposed on older crater rims. Though Cassini imaging scientists recently reported that they did not see evidence in Cassini images of a ring around Rhea, the authors of this paper suggest the crash of orbiting material, perhaps a ring, to the surface of Rhea in the not-too-distant past could explain the bluish splotches.

"Analyzing the image color ratios is a great way to really enhance the otherwise subtle color variations and make apparent some of the processes at play in the Saturn system," said Amanda Hendrix, Cassini deputy project scientist at NASA's Jet Propulsion Laboratory, Pasadena, Calif. "The Cassini images highlight the importance and potential effects of so-called 'space weathering' that occurs throughout the solar system – on any surface that isn't protected by a thick atmosphere or magnetic field."