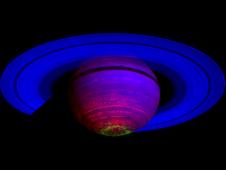 This false-color composite image shows the glow of auroras streaking out about 1,000 kilometers (600 miles) from the cloud tops of Saturn's south polar region. Image credit: NASA/JPL/University of Arizona/University of Leicester
› Full image and caption 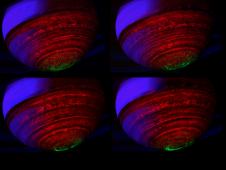 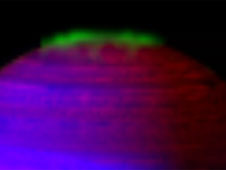 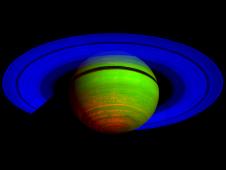 
PASADENA, Calif. – A new movie and images showing Saturn's shimmering aurora over a two-day period are helping scientists understand what drives some of the solar system's most impressive light shows.

The new, false-color images and video are available online at: http://www.nasa.gov/cassini and http://saturn.jpl.nasa.gov

The movie and images are part of a new study that, for the first time, extracts auroral information from the entire catalogue of Saturn images taken by the visual and infrared mapping spectrometer instrument (VIMS) aboard NASA's Cassini spacecraft. These images and preliminary results are being presented by Tom Stallard, lead scientist on a joint VIMS and Cassini magnetometer collaboration, at the European Planetary Science Congress in Rome on Friday, Sept. 24.

In the movie, the aurora phenomenon clearly varies significantly over the course of a Saturnian day, which lasts around 10 hours 47 minutes. On the noon and midnight sides (left and right sides of the images, respectively), the aurora can be seen to brighten significantly for periods of several hours, suggesting the brightening is connected with the angle of the sun. Other features can be seen to rotate with the planet, reappearing at the same time and the same place on the second day, suggesting that these are directly controlled by the orientation of Saturn's magnetic field.

"Saturn's auroras are very complex and we are only just beginning to understand all the factors involved," Stallard said. "This study will provide a broader view of the wide variety of different auroral features that can be seen, and will allow us to better understand what controls these changes in appearance."

Auroras on Saturn occur in a process similar to Earth's northern and southern lights. Particles from the solar wind are channeled by Saturn's magnetic field toward the planet's poles, where they interact with electrically charged gas (plasma) in the upper atmosphere and emit light. At Saturn, however, auroral features can also be caused by electromagnetic waves generated when the planet's moons move through the plasma that fills Saturn's magnetosphere.

Previous data from Cassini have contributed to a number of detailed snapshots of the aurora. But understanding the overall nature of the auroral region requires a huge number of observations, which can be difficult because Cassini observation time close to Saturn is in high demand, Stallard said.

However, VIMS observations of numerous other scientific targets also include auroral information. Sometimes the aurora can be clearly seen, but sometimes Stallard and colleagues add multiple images together to produce a signal. This wide set of observations allows Cassini scientists to understand the aurora in general, rather than the beautiful specific cases that dedicated auroral observations allow, Stallard said.

Stallard and his colleagues have investigated about 1,000 images from the 7,000 that VIMS has taken to date of Saturn's auroral region.

The new, false-color images show Saturn's aurora glowing in green around the planet's south pole. The auroral information in the two images was extracted from VIMS data taken on May 24, 2007, and Nov. 1, 2008. The video covers about 20 Earth hours of VIMS observations, from Sept. 22 and 23, 2007.

"Detailed studies like this of Saturn's aurora help us understand how they are generated on Earth and the nature of the interactions between the magnetosphere and the uppermost regions of Saturn's atmosphere," said Linda Spilker, Cassini project scientist, based at NASA's Jet Propulsion Laboratory, Pasadena, Calif.

The Cassini-Huygens mission is a cooperative project of NASA, the European Space Agency and the Italian Space Agency. JPL manages the mission for NASA's Science Mission Directorate, Washington, D.C. The Cassini orbiter was designed, developed and assembled at JPL. The visual and infrared mapping spectrometer team is based at the University of Arizona, Tucson. Stallard's work on Saturn's auroras is funded by the Science and Technologies Facilities Council, Swindon, U.K.