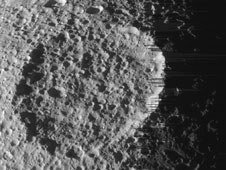 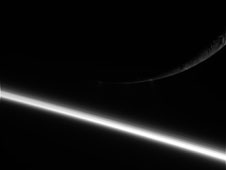 The flyby on August 13 targeted the geyser moon Enceladus, but also brought Cassini close to two other moons--Tethys and Dione.

Cassini was also able to obtain a portrait of Enceladus over the bright arc of Saturn's atmosphere and a moody still life of one of the "tiger stripe" fissures at the Enceladus south polar region on the cusp of darkness. This particular "tiger stripe" -- which is the nickname for the fissures spewing water vapor and organic particles out into space - is called Damascus Sulcus. It was also the subject of a heat scan by Cassini's composite infrared spectrometer. Scientists are still analyzing the results.

More raw images from the Enceladus flyby, dubbed "E11," are available at: http://saturn.jpl.nasa.gov/photos/raw/.

More information about the Cassini-Huygens mission is at: http://www.nasa.gov/cassini and http://saturn.jpl.nasa.gov.