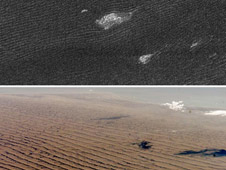 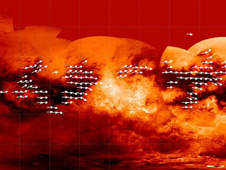 The answer to the mystery of dune patterns on Saturn's moon Titan did turn out to be blowing in the wind. It just wasn't from the direction many scientists expected.

Basic principles describing the rotation of planetary atmospheres and data from the European Space Agency's Huygens probe led to circulation models that showed surface winds streaming generally east-to-west around Titan's equatorial belt. But when NASA's Cassini spacecraft obtained the first images of dunes on Titan in 2005, the dunes' orientation suggested the sands – and therefore the winds – were moving from the opposite direction, or west to east.

A new paper by Tetsuya Tokano in press with the journal Aeolian Research seeks to explain the paradox. It explains that seasonal changes appear to reverse wind patterns on Titan for a short period. These gusts, which occur intermittently for perhaps two years, sweep west to east and are so strong they do a better job of transporting sand than the usual east-to-west surface winds. Those east-to-west winds do not appear to gather enough strength to move significant amounts of sand.

A related perspective article about Tokano's work by Cassini radar scientist Ralph Lorenz, the lead author on a 2009 paper mapping the dunes, appears in this week's issue of the journal Science.

"It was hard to believe that there would be permanent west-to-east winds, as suggested by the dune appearance," said Tokano, of the University of Cologne, Germany. "The dramatic, monsoon-type wind reversal around equinox turns out to be the key."

The dunes track across the vast sand seas of Titan only in latitudes within 30 degrees of the equator. They are about a kilometer (half a mile) wide and tens to hundreds of kilometers (miles) long. They can rise more than 100 meters (300 feet) high. The sands that make up the dunes appear to be made of organic, hydrocarbon particles. The dunes' ridges generally run west-to-east, as wind here generally sheds sand along lines parallel to the equator.

Scientists predicted winds in the low latitudes around Titan's equator would blow east-to-west because at higher latitudes the average wind blows west-to-east. The wind forces should balance out, based on basic principles of rotating atmospheres.

Tokano re-analyzed a computer-based global circulation model for Titan he put together in 2008. That model, like others for Titan, was adapted from ones developed for Earth and Mars. Tokano added in new data on Titan topography and shape based on Cassini radar and gravity data. In his new analysis, Tokano also looked more closely at variations in the wind at different points in time rather than the averages. Equinox periods jumped out.

Equinoxes occur twice a Titan year, which is about 29 Earth years. During equinox, the sun shines directly over the equator, and heat from the sun creates upwelling in the atmosphere. The turbulent mixing causes the winds to reverse and accelerate. On Earth, this rare kind of wind reversal happens over the Indian Ocean in transitional seasons between monsoons.

The episodic reverse winds on Titan appear to blow around 1 to 1.8 meters per second (2 to 4 mph). The threshold for sand movement appears to be about 1 meter per second (2 mph), a speed that the typical east-to-west winds never appear to surpass. Dune patterns sculpted by strong, short episodes of wind can be found on Earth in the northern Namib sand seas in Namibia, Africa.

"This is a subtle discovery -- only by delving into the statistics of the winds in the model could this rather distressing paradox be resolved," said Ralph Lorenz, a Cassini radar scientist based at the Johns Hopkins University Applied Physics Laboratory in Laurel, Md. "This work is also reassuring for preparations for proposed future missions to Titan, in that we can become more confident in predicting the winds which can affect the delivery accuracy of landers, or the drift of balloons."

The Cassini-Huygens mission is a cooperative project of NASA, the European Space Agency and the Italian Space Agency. JPL manages the Cassini-Huygens mission for NASA's Science Mission Directorate. The Cassini orbiter was designed, developed and assembled at JPL. The radar instrument was built by JPL and the Italian Space Agency, working with team members from the United States and several European countries. JPL is a division of the California Institute of Technology in Pasadena.