Grow Text SizeShrink Text Size
Saturn's Icy Moon May Keep Oceans Liquid with Wobble
Saturn's icy moon Enceladus should not be one of the most promising places in our solar system to look for extraterrestrial life. Instead, it should have frozen solid billions of years ago. Located in the frigid outer solar system, it's too far from the sun to have oceans of liquid water -- a necessary ingredient for known forms of life -- on its surface.

Some worlds, like Mars or Jupiter's moon Europa, give hints that they might harbor liquid water beneath their surfaces. Mars is about 4,200 miles across and Europa almost 2,000 miles across. However, with a diameter only slightly more than 300 miles, Enceladus just doesn’t have the bulk needed for its interior to stay warm enough to maintain liquid water underground.

Dramatic plumes (cloudy, white areas), both large and small, spray water ice out from many locations along the famed "tiger stripes" near the south pole of Saturn's moon Enceladus. The tiger stripes are fissures that spray icy particles, water vapor and organic compounds. More than 30 individual jets of different sizes can be seen in this image and more than 20 of them had not been identified before. This mosaic was created from two high-resolution images that were captured by the narrow-angle camera when NASA’s Cassini spacecraft flew past Enceladus and through the jets on Nov. 21, 2009. Credit: NASA/JPL/SSI
Full-resolution copy
With temperatures around 324 degrees below zero Fahrenheit, the surface of Enceladus is indeed frozen. However, in 2005 NASA's Cassini spacecraft discovered a giant plume of water gushing from cracks in the surface over the moon's south pole, indicating that there was a reservoir of water beneath the ice. Analysis of the plume by Cassini revealed that the water is salty, indicating the reservoir is large, perhaps even a global subsurface ocean. Scientists estimate from the Cassini data that the south polar heating is equivalent to a continuous release of about 13 billion watts of energy.

To explain this mysterious warmth, some scientists invoke radiation coupled with tidal heating. As it formed, Enceladus (like all solar system objects) incorporated matter from the cloud of gas and dust left over from our sun’s formation. In the outer solar system, as Enceladus formed it grew as ice and rock coalesced. If Enceladus was able to gather greater amounts of rock, which contained radioactive elements, enough heat could have been generated by the decay of the radioactive elements in its interior to melt the body.

However, in smaller moons like Enceladus, the cache of radioactive elements usually is not massive enough to produce significant heat for long, and the moon should have soon cooled and solidified. So, unless another process within Enceladus somehow generated heat, any liquid formed by the melting of its interior would have frozen long ago.

This led scientists to consider the role of tidal heating as a way to keep Enceladus warm enough for liquid water to remain under its surface. Enceladus' orbit around Saturn is slightly oval-shaped. As it travels around Saturn, Enceladus moves closer in and then farther away. When Enceladus is closer to Saturn, it feels a stronger gravitational pull from the planet than when it is farther away. Like gently squeezing a rubber ball slightly deforms its shape, the fluctuating gravitational tug on Enceladus causes it to flex slightly. The flexing, called gravitational tidal forcing, generates heat from friction deep within Enceladus.

The gravitational tides also produce stress that cracks the surface ice in certain regions, like the south pole, and may be reworking those cracks daily. Tidal stress can pull these cracks open and closed while shearing them back and forth. As they open and close, the sides of the south polar cracks move as much as a few feet, and they slide against each other by up to a few feet as well. This movement also generates friction, which (like vigorously rubbing your hands together) releases extra heat at the surface at locations that should be predictable with our understanding of tidal stress. 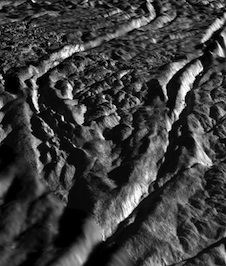 This is a perspective view of a large fissure, called the Baghdad Sulcus, in the icy crust of Enceladus. It was generated using images of Enceladus acquired by the Cassini-Huygens mission in August 2008, together with a new topographic map of the region produced by Dr. Paul Schenk at the Lunar and Planetary Institute in Houston, Texas. (Height has been exaggerated by about 10 times to enhance clarity.) This view shows a wedge-shaped area between two prominent branches of Baghdad Sulcus. Each branch consists of two large parallel ridges up to 1.2 miles across separated by a deep V-shaped trough. The ridges are approximately 260 to 325 feet high. The troughs between the ridges are 650 to 820 feet deep. The maximum separation between the two branches is 7.5 miles. Credit: NASA/JPL/Space Science Institute/Universities Space Research Association/Lunar & Planetary Institute
To test the tidal heating theory, scientists with the Cassini team created a map of the gravitational tidal stress on the moon's icy crust and compared it to a map of the warm zones created using Cassini's composite infrared spectrometer instrument (CIRS). Assuming the greatest stress is where the most friction occurs, and therefore where the most heat is released, areas with the most stress should overlap the warmest zones on the CIRS map.

"However, they don't exactly match," says Dr. Terry Hurford of NASA's Goddard Space Flight Center, Greenbelt, Md. "For example, in the fissure called the Damascus Sulcus, the area experiencing the greatest amount of shearing is about 50 kilometers (about 31 miles) from the zone of greatest heat."

Hurford and his team believe the discrepancy can be resolved if Enceladus’ rotation rate is not uniform – if it wobbles slightly as it rotates. Enceladus' wobble, technically called "libration," is barely noticeable. "Cassini observations have ruled out a wobble greater than about 2 degrees with respect to Enceladus' uniform rotation rate," says Hurford.

The team created a computer simulation that made maps of the surface stress on Enceladus for various wobbles, and found a range where the areas of greatest stress line up better with the observed warmest zones.

"Depending on whether the wobble moves with or against the movement of Saturn in Enceladus' sky, a wobble ranging from 2 degrees down to 0.75 degrees produces the best fit to the observed warmest zones," said Hurford.

The wobble also helps with the heating conundrum by generating about five times more heat in Enceladus’ interior than tidal stress alone, and the extra heat makes it likely that Enceladus' ocean could be long-lived, according to Hurford. This is significant in the search for life, because life requires a stable environment to develop.

The wobble is probably caused by Enceladus' uneven shape. "Enceladus is not completely spherical, so as it moves in its orbit, the pull of Saturn's gravity generates a net torque that forces the moon to wobble," said Hurford. Also, Enceladus' orbit is kept oval-shaped, maintaining the tidal stress, because of the gravitational tug from a neighboring larger moon Dione. Dione is farther away from Saturn than Enceladus, so it takes longer to complete its orbit. For every orbit Dione completes, Enceladus finishes two orbits, producing a regular alignment that pulls Enceladus' orbit into an oval shape.


The Cassini-Huygens mission is a cooperative project of NASA, the European Space Agency, and the Italian Space Agency. NASA's Jet Propulsion Laboratory (JPL), a division of the California Institute of Technology in Pasadena, manages the mission for NASA's Science Mission Directorate, Washington, D.C. The Cassini orbiter and its two onboard cameras were designed, developed and assembled at JPL. The composite infrared spectrometer team is based at NASA Goddard, where the instrument was built. Dr. Michael Flasar from NASA Goddard is the composite infrared spectrometer Principal Investigator.