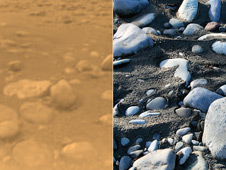 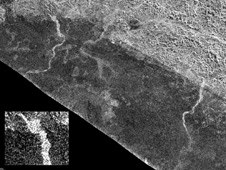 On the final flyby of Cassini's original four-year tour, its radar mapper captured these unusual channels on Titan at the edge of Xanadu. Image credit: NASA/JPL
› Full image and caption

It appears flash flooding has paved streambeds in the Xanadu region of Saturn's moon Titan with thousands of sparkling crystal balls of ice, according to scientists with NASA's Cassini spacecraft. By analyzing the way the terrain has scattered radar beams, scientists deduce the spheres measure at least a few centimeters (inches) and maybe up to a couple of meters (yards) in diameter. The spheres likely originated as part of water-ice bedrock in higher terrain in Xanadu.

"What we believe happened in this area is a lot like what creates polished river rocks on Earth," said Alice Le Gall, a postdoctoral fellow at NASA's Jet Propulsion Laboratory, Pasadena, Calif., and the lead author of the study, which used the Cassini radar instrument. "Bouncing downstream smoothes out the edges of rocks."

As foothill residents know in southern California and other areas, sudden rains can trigger mudslides and flooding at the mountainous fringes of desert areas. Those flows can pick up boulders and debris and tumble them downstream. On Titan, the flows appear to have occurred periodically for eons, on a catastrophic scale. The process on Titan, however, involves rain made of liquid methane and ethane, rather than Earth's water rain. Titan's rocks are believed to be made primarily of water ice frozen into a hard mass about minus 180 degrees Celsius (minus 290 degrees Fahrenheit), rather than Earth's mineral rocks.

Earth-like river rocks have already been observed on Titan at the landing site of the European Space Agency's Huygens probe, near the equator in the borderland between the Adiri and Shangri-la regions. The landing site also showed signs of flash flooding that deposited cobblestones about 2 to 20 centimeters (1 to 8 inches) in diameter.

But the spidery channels in this southern lowland part of Xanadu looked brighter to Cassini's radar instrument than the Huygens landing area. In fact, the channels, which were scanned by Cassini in May 2008, are among the brightest features ever seen on Titan by the radar instrument.

In a paper now available online in the journal Icarus, Le Gall and colleagues concluded that the most plausible explanation for the extreme brightness of the Xanadu channels was a collection of transparent spherical sediments, packed more tightly together than the cobblestones at the Huygens landing site. The effect would be similar to bejeweling an area with light-catching rhinestones.

The spheres appear to be made of water ice - possibly doped with ammonia - that would look bright to the microwaves used by Cassini's radar. Spheres are good at sending light back in the direction it came from. This property has actually led manufacturers to use plastic spheres in reflective paints and tape, Le Gall said.

Xanadu may be an especially good gem grinder because of its broad expanse and gentle southward slope. Flows could have traveled long distances there and tumbled the chunks for hundreds of kilometers (miles). The subtle work to shape them into spheres could have come from fine grit rubbing against the rocks in the flowing methane. Or, ice may be malleable in Titan's cold temperatures, deforming plastically during the collisions rather than fracturing. The flows that transported these icy spheres probably traveled around 1 meter per second (2 mph).

"It's been really hard for a long time for people to understand why Xanadu is so bright," said Steve Wall, a radar team member at JPL. "You might not expect these kinds of geometries in a natural setting, but we believe this can explain the enigma."

The radar team plans to continue looking for other instances of small, smooth spheres in nature to increase their confidence about the explanation. They also said more study is needed on the mechanical properties of water ice at such cold temperatures.

"Here is yet another example of Titan as a world with Earth-like processes," said Linda Spilker, Cassini project scientist at JPL. "As the seasons change on Titan, maybe we'll get a chance to see methane flow through some of the river channels."