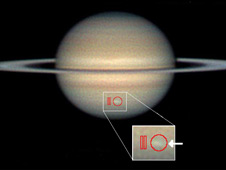 Amateur astronomer Christopher Go took this image of the storm on March 13, 2010. The arrow indicates the location of the storm and the red outlines show where Cassini's composite infrared spectrometer gathered data. Image credit: C.Go and NASA/JPL-Caltech/GSFC › Larger image 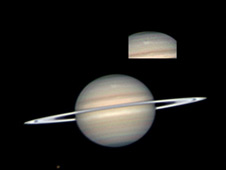 Amateur astronomer Anthony Wesley obtained this image of a storm on Saturn from his backyard telescope in Murrumbateman, Australia, on March 22, 2010. He sent it to scientists working with NASA's Cassini spacecraft the next day. Image credit: A. Wesley
› Larger image 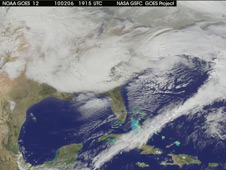 With the help of amateur astronomers, the composite infrared spectrometer instrument aboard NASA's Cassini spacecraft has taken its first look at a massive blizzard in Saturn's atmosphere. The instrument collected the most detailed data to date of temperatures and gas distribution in that planet's storms.

The data showed a large, turbulent storm, dredging up loads of material from the deep atmosphere and covering an area at least five times larger than the biggest blizzard in this year's Washington, D.C.-area storm front nicknamed "Snowmageddon."

"We were so excited to get a heads-up from the amateurs," said Gordon Bjoraker, a composite infrared spectrometer team member based at NASA's Goddard Space Flight Center in Greenbelt, Md. Normally, he said, "Data from the storm cell would have been averaged out."

Cassini's radio and plasma wave instrument and imaging cameras have been tracking thunder and lightning storms on Saturn for years in a band around Saturn's mid-latitudes nicknamed "storm alley." But storms can come and go on a time scale of weeks, while Cassini's imaging and spectrometer observations have to be locked in place months in advance.

The radio and plasma wave instrument regularly picks up electrostatic discharges associated with the storms, so team members have been sending periodic tips to amateur astronomers, who can quickly go to their backyard telescopes and try to see the bright convective storm clouds. Amateur astronomers including Anthony Wesley, Trevor Barry and Christopher Go got one of those notices in February and were able to take dozens of pictures over the next several weeks.

In late March, Wesley, an amateur astronomer from Australia who was actually the first person to detect the new dark spot caused by an impact on Jupiter last summer, sent Cassini scientists an e-mail with a picture of the storm.

"I wanted to be sure that images like these were being seen by the Cassini team just in case this was something of interest to be imaged directly by Cassini or the Hubble Space Telescope," Wesley wrote.

Cassini scientists eagerly pored through the images, including a picture of the storm at its peak on March 13 by Go, who lives in the Philippines.

By a stroke of luck, the composite infrared spectrometer happened to be targeting the latitude of the storms. The instrument's scientists knew there could be storms there, but didn't know when they might be active.

Data obtained by the spectrometer on March 25 and 26 showed larger than expected amounts of phosphine, a gas typically found in Saturn's deep atmosphere and an indicator that powerful currents were dredging material upward into the upper troposphere. The spectrometer data also showed another signature of the storm: the tropopause, the dividing line between the serene stratosphere and the lower, churning troposphere, was about 0.5 Kelvin (1 degree Fahrenheit) colder in the storm cell than in neighboring areas.

"A balloonist floating about 100 kilometers down from the bottom of Saturn's calm stratosphere would experience an ammonia-ice blizzard with the intensity of Snowmageddon," said Brigette Hesman, a composite infrared spectrometer team member who is an assistant research scientist at the University of Maryland. "These blizzards appear to be powered by violent storms deeper down - perhaps another 100 to 200 kilometers down - where lightning has been observed and the clouds are made of water and ammonia."

The Cassini-Huygens mission is a cooperative project of NASA, the European Space Agency and the Italian Space Agency. JPL, a division of the California Institute of Technology in Pasadena, manages the mission for NASA's Science Mission Directorate, Washington, D.C. The Cassini orbiter and its two onboard cameras were designed, developed and assembled at JPL. The composite infrared spectrometer team is based at NASA's Goddard Space Flight Center, Greenbelt, Md., where the instrument was built.