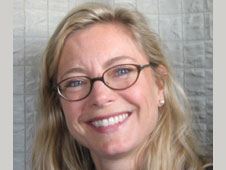 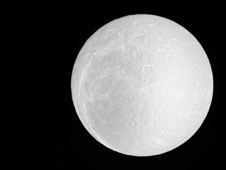 This image was taken on March 02, 2010 and received on Earth March 03, 2010. Image credit: NASA/JPL/Space Science Institute .
› Full image and caption 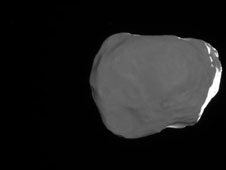 This image was taken on March 03, 2010 and received on Earth March 03, 2010. Image credit: NASA/JPL/Space Science Institute
› Full image and caption

Cassini's closest-ever flyby of Saturn's moon Rhea went quite smoothly and teams are busy checking out their data! These flybys never fail to amaze me. And the raw images -- which give us an unprocessed first look -- are really cool!

Raw image N00152150 gives us a view of part of the bright, fractured terrain we refer to as "wispy terrain" from about 14,000 kilometers (8,900 miles) away. We know that Rhea's albedo overall is quite high. (When I say "albedo," I basically mean "brightness" or "reflectivity." Studying the albedo can tell a lot about surface composition, geologic processes, and interactions with external environment.) But this image demonstrates how bright these cracks are since they are so shiny that the surrounding terrain looks quite dark. There are also some interesting apparent albedo variations seen in this image, which are really intriguing.

This raw image (N00152175) from Cassini's narrow-angle camera image was taken about 40 minutes after closest approach. The image shows a region adjacent to the wispy terrain --craters, craters everywhere! And wow, are those crater rims bright compared to the surrounding terrain.

Cassini captured a full portrait of the serene moon with its wide-angle camera (raw image W00063107) on the outbound leg of the flyby, about 1.25 hours after closest approach. Keep in mind that the phase angle is quite low here (only about 2.5 degrees), meaning that the sun is almost directly behind Cassini and Rhea is nearly fully illuminated -- so there are no shadows. Large-scale albedo variations are apparent across the surface.

The spacecraft also obtained a cool image of little Helene with raw image N00152211 . We're basically looking at the night side of the body -- but it doesn't appear very dark, because it's illuminated by sunlight reflecting off Saturn. During the later image sequence of Helene, this small moon was transiting Saturn - so you can see Saturn in the background.

Sometimes,pointing at these little guys can be very tricky, especially so close after a targeted flyby. It can be difficult (or impossible!) to get the positions of the spacecraft, the moon and the instruments all lined up -- but boy are these close-up Helene images incredible! The detail on the surface is tremendous, and should go a long way to informing geologists about surface properties and processes.

As the imaging team is taking a closer look at images such as these, other instrument teams -- including those for the radar instrument, composite infrared spectrometer, visual and infrared mapping spectrometer and the ultraviolet imaging spectrograph (the instrument I work on) -- are also busy processing their data. At a science meeting Friday, we talked about a few of the preliminary results. Some of the magnetospheric and plasma science instruments teams reported that they're seeing some really interesting and surprising results! So stay tuned to hear more about those!

Of course, after one successful flyby, we get right to work on another. Coming up next: Dione on April 7!