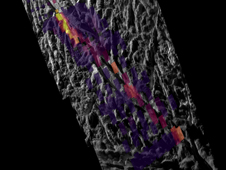 In this unique mosaic image combining high-resolution data from the imaging science subsystem and composite infrared spectrometer aboard NASA's Cassini spacecraft, pockets of heat appear along one of the mysterious fractures in the south polar region of Saturn's moon Enceladus. Image credit: NASA/JPL/GSFC/SWRI/SSI
› Full image and caption
› See related images

Newly released images from last November's swoop over Saturn's icy moon Enceladus by NASA's Cassini spacecraft reveal a forest of new jets spraying from prominent fractures crossing the south polar region and yield the most detailed temperature map to date of one fracture.

The new images from the imaging science subsystem and the composite infrared spectrometer teams also include the best 3-D image ever obtained of a "tiger stripe," a fissure that sprays icy particles, water vapor and organic compounds. There are also views of regions not well-mapped previously on Enceladus, including a southern area with crudely circular tectonic patterns.

The images and additional information are online at http://www.nasa.gov/cassini and http://saturn.jpl.nasa.gov.

"Enceladus continues to astound," said Bob Pappalardo, Cassini project scientist at NASA's Jet Propulsion Laboratory in Pasadena, Calif. "With each Cassini flyby, we learn more about its extreme activity and what makes this strange moon tick."

For Cassini's visible-light cameras, the Nov. 21, 2009 flyby provided the last look at Enceladus' south polar surface before that region of the moon goes into 15 years of darkness, and includes the most detailed look yet at the jets.

Scientists planned to use this flyby to look for new or smaller jets not visible in previous images. In one mosaic, scientists count more than 30 individual geysers, including more than 20 that had not been seen before. At least one jet spouting prominently in previous images now appears less powerful.

"This last flyby confirms what we suspected," said Carolyn Porco, imaging team lead based at the Space Science Institute in Boulder, Colo. "The vigor of individual jets can vary with time, and many jets, large and small, erupt all along the tiger stripes." 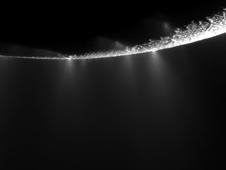 Dramatic plumes, both large and small, spray water ice out from many locations along the famed "tiger stripes" near the south pole of Saturn's moon Enceladus. Image credit: NASA/JPL/SSI
› Full image and caption
› See related images

A new map that combines heat data with visible-light images shows a 40-kilometer (25-mile) segment of the longest tiger stripe, known as Baghdad Sulcus. The map illustrates the correlation, at the highest resolution yet seen, between the geologically youthful surface fractures and the anomalously warm temperatures that have been recorded in the south polar region. The broad swaths of heat previously detected by the infrared spectrometer appear to be confined to a narrow, intense region no more than a kilometer (half a mile) wide along the fracture.

In these measurements, peak temperatures along Baghdad Sulcus exceed 180 Kelvin (minus 135 degrees Fahrenheit), and may be higher than 200 Kelvin (minus 100 degrees Fahrenheit). These warm temperatures probably result from heating of the fracture flanks by the warm, upwelling water vapor that propels the ice-particle jets seen by Cassini's cameras. Cassini scientists will be testing this idea by investigating how well the hot spots correspond with the jet sources.

"The fractures are chilly by Earth standards, but they're a cozy oasis compared to the numbing 50 Kelvin (-370 Fahrenheit) of their surroundings," said John Spencer, a composite infrared spectrometer team member based at Southwest Research Institute in Boulder, Colo. "The huge amount of heat pouring out of the tiger stripe fractures may be enough to melt the ice underground. Results like this make Enceladus one of the most exciting places we've found in the solar system."

Some of Cassini's scientists infer that the warmer the temperatures are at the surface, the greater the likelihood that jets erupt from liquid. "And if true, this makes Enceladus' organic-rich, liquid sub-surface environment the most accessible extraterrestrial watery zone known in the solar system," Porco said.

The Nov. 21 flyby was the eighth targeted encounter with Enceladus. It took the spacecraft to within about 1,600 kilometers (1,000 miles) of the moon's surface, at around 82 degrees south latitude.