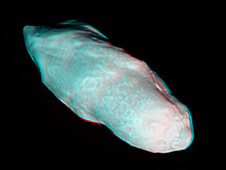 The image exposes the irregular shape and circular surface scars on Prometheus, pointing to a violent history. These craters are probably the remnants from impacts long ago.

Prometheus is one of Saturn's innermost moons. It orbits the gas-giant at a distance of about 140,000 kilometers (86,000 miles) and is 86 kilometers (53 miles) across at its widest point. The porous, icy world was originally discovered in images taken by NASA's Voyager 1 spacecraft back in 1980.

Cassini's narrow-angle camera captured two black-and-white images of the moon on Dec. 26, 2009, and the imaging team combined the images to make this new stereo view. It looks different from the "egg-cellent" raw image of Prometheus obtained on Jan. 27 because that view shows one of the short ends of the oddly shaped moon. In this 3-D image, the sun illuminates Prometheus at a different angle, making the moon's elongated body visible.

The Cassini Equinox Mission is a joint United States and European endeavor. The Jet Propulsion Laboratory, a division of the California Institute of Technology in Pasadena, manages the mission for NASA's Science Mission Directorate, Washington, D.C. The Cassini orbiter was designed, developed and assembled at JPL. For more information about the Cassini Equinox Mission visit: http://www.nasa.gov/cassini and http://saturn.jpl.nasa.gov.