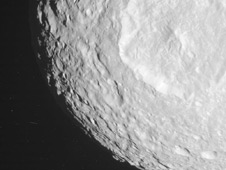 Blazing through its closest pass of the Saturnian moon Mimas on Feb. 13, Cassini sent back striking close-ups of the moon likened to the Death Star from "Star Wars" and the enormous crater scarring its surface. The flyby also yielded solid data on the moon's thermal signature and surface composition.

Some of the raw, unprocessed images sent back from the flyby show the bright, steep slopes of the giant Herschel Crater, which measures about 140 kilometers (88 miles) wide. The icy slopes appear to be pitched around 24 degrees, which would probably earn them a black- or double-black-diamond rating on Earth. Olympic downhill skiers could probably tear down these runs with ease, but it's clear Mimas is no place for bunny-slope beginners.

The images, which have the highest resolution so far, also show jumbled terrain inside the crater and many craters within the crater. These features hint at a long history, which scientists will be working diligently to analyze.

"This flyby has been like looking at a cell or an onion skin under the microscope for the first time," said Bonnie Buratti, one of the leads for the Satellite Orbiter Science Team. "We'd seen the large crater from afar since the early 1980s, but now its small bumps and blemishes are all clearly visible."

This encounter took the spacecraft as close as about 9,500 kilometers (5,900 miles) above Mimas. Cassini had to maneuver through a dusty region to get in position, but survived the trip unscathed, as expected. 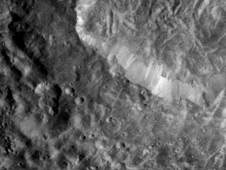 The moon averages 396 kilometers (246 miles) in diameter. The walls of Herschel Crater are about 5 kilometers (3 miles) high, and parts of the floor are approximately 10 kilometers (6 miles) deep.