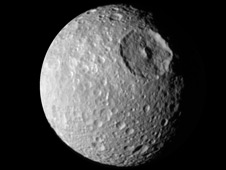 During its approach to Mimas on Aug. 2, 2005, the Cassini spacecraft narrow-angle camera obtained multi-spectral views of the moon from a range of 228,000 kilometers (142,500 miles). Image credit: NASA/JPL/Space Science Institute
› Full image and caption

On Feb. 13, 2010, NASA's Cassini spacecraft will make its closest examination yet of Mimas, an eyeball-shaped moon of Saturn that has also been likened to the Death Star of "Star Wars." The spacecraft will be returning the highest-resolution images yet of this battered satellite.

Mimas bears the mark of a violent, giant impact from the past - the 140-kilometer-wide (88-mile-wide) Herschel Crater - and scientists hope the encounter will help them explain why the moon was not blown to smithereens when the impact happened. They will also be trying to count smaller dings inside the basin of Herschel Crater so they can better estimate its age.

In addition, Cassini's composite infrared spectrometer will be working to determine the thermal signature of the moon, and other instruments will be making measurements to learn more about the surface composition.

The Mimas flyby involves a significant amount of skill because the spacecraft will be passing through a dusty region to get there. Mission managers have planned for the Cassini spacecraft to lead with its high-gain antenna to provide a barrier of protection. At closest approach, the spacecraft will be flying about 9,500 kilometers (5,900 miles) above the moon. Cassini will start taking images and measurements shortly after closest approach.

Mimas is an inner moon of Saturn that averages 396 kilometers (246 miles) in diameter. The diameter of Herschel Crater is about one-third that of the entire moon. The walls of the crater are about 5 kilometers (3 miles) high, and parts of the floor are approximately 10 kilometers (6 miles) deep.