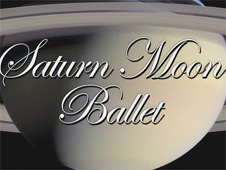 Like sugar plum fairies in "The Nutcracker," the moons of Saturn performed a celestial ballet before the eyes of NASA's Cassini spacecraft. New movies frame the moons' silent dance against the majestic sweep of the planet's rings and show as many as four moons gliding around one another.

To celebrate the holidays, the Cassini imaging team has created a video collection of "mutual events," which occur when one moon passes in front of another, as seen from the spacecraft. Imaging scientists use mutual event observations to refine their understanding of the dynamics of Saturn's moons. Digital image processing has enabled scientists to turn these routine observations into breathtaking displays of celestial motion. The original images were captured between Aug. 27 and Nov. 8, 2009.

"As yet another year in Saturn orbit draws to a close, these wondrous movies of an alien place clear across the solar system remind us how fortunate we are to be engaged in this magnificent exploratory expedition," said Carolyn Porco, Cassini imaging team leader at the Space Science Institute in Boulder, Colo.