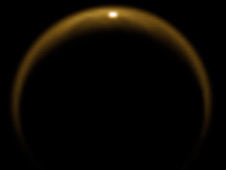 This image shows the first flash of sunlight reflected off a lake on Saturn's moon Titan. Image credit: NASA/JPL/University of Arizona/DLR
› Full image and caption

PASADENA, Calif. -- NASA's Cassini Spacecraft has captured the first flash of sunlight reflected off a lake on Saturn's moon Titan, confirming the presence of liquid on the part of the moon dotted with many large, lake-shaped basins.

Cassini scientists had been looking for the glint, also known as a specular reflection, since the spacecraft began orbiting Saturn in 2004. But Titan's northern hemisphere, which has more lakes than the southern hemisphere, has been veiled in winter darkness. The sun only began to directly illuminate the northern lakes recently as it approached the equinox of August 2009, the start of spring in the northern hemisphere. Titan's hazy atmosphere also blocked out reflections of sunlight in most wavelengths. This serendipitous image was captured on July 8, 2009, using Cassini's visual and infrared mapping spectrometer.

This image will be presented Friday, Dec. 18, at the fall meeting of the American Geophysical Union in San Francisco.

"This one image communicates so much about Titan -- thick atmosphere, surface lakes and an otherworldliness," said Bob Pappalardo, Cassini project scientist, based at NASA's Jet Propulsion Laboratory, Pasadena, Calif. "It's an unsettling combination of strangeness yet similarity to Earth. This picture is one of Cassini's iconic images."

Titan, Saturn's largest moon, has captivated scientists because of its many similarities to Earth. Scientists have theorized for 20 years that Titan's cold surface hosts seas or lakes of liquid hydrocarbons, making it the only other planetary body besides Earth believed to harbor liquid on its surface. While data from Cassini have not indicated any vast seas, they have revealed large lakes near Titan's north and south poles.

In 2008, Cassini scientists using infrared data confirmed the presence of liquid in Ontario Lacus, the largest lake in Titan's southern hemisphere. But they were still looking for the smoking gun to confirm liquid in the northern hemisphere, where lakes are also larger.

Katrin Stephan, of the German Aerospace Center (DLR) in Berlin, an associate member of the Cassini visual and infrared mapping spectrometer team, was processing the initial image and was the first to see the glint on July 10th.

"I was instantly excited because the glint reminded me of an image of our own planet taken from orbit around Earth, showing a reflection of sunlight on an ocean," Stephan said. "But we also had to do more work to make sure the glint we were seeing wasn't lightning or an erupting volcano."

Team members at the University of Arizona, Tucson, processed the image further, and scientists were able to compare the new image to radar and near-infrared-light images acquired from 2006 to 2008.

They were able to correlate the reflection to the southern shoreline of a lake called Kraken Mare. The sprawling Kraken Mare covers about 400,000 square kilometers (150,000 square miles), an area larger than the Caspian Sea, the largest lake on Earth. It is located around 71 degrees north latitude and 337 degrees west latitude.

The finding shows that the shoreline of Kraken Mare has been stable over the last three years and that Titan has an ongoing hydrological cycle that brings liquids to the surface, said Ralf Jaumann, a visual and infrared mapping spectrometer team member who leads the scientists at the DLR who work on Cassini. Of course, in this case, the liquid in the hydrological cycle is methane rather than water, as it is on Earth.

"These results remind us how unique Titan is in the solar system," Jaumann said. "But they also show us that liquid has a universal power to shape geological surfaces in the same way, no matter what the liquid is."

The Cassini-Huygens mission is a cooperative project of NASA, the European Space Agency and the Italian Space Agency. JPL manages the mission for NASA's Science Mission Directorate, Washington, D.C. The Cassini orbiter was designed, developed and assembled at JPL. The visual and infrared mapping spectrometer team is based at the University of Arizona, Tucson.