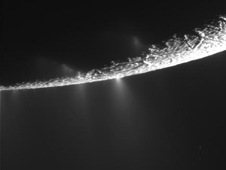 This unprocessed image was captured by NASA's Cassini spacecraft during its Nov. 21, 2009 flyby of Saturn's moon Enceladus. It shows the moon's south polar region, where jets of water vapor and other particles spew from fissures on the surface. Image credit: NASA/JPL/Space Science Institute
› Full image and caption

NASA's Cassini spacecraft has sailed seamlessly through the Nov. 21 flyby of Saturn's moon Enceladus and started transmitting uncalibrated temperature data and images of the rippling terrain. These data and images will be processed and analyzed in the coming weeks. They will help scientists create the most-detailed-yet mosaic image of the southern part of the moon's Saturn-facing hemisphere and a contiguous thermal map of one of the intriguing "tiger stripe" features, with the highest resolution to date.

"These first raw images are spectacular, and paint an even more fascinating picture of Enceladus," said Bob Pappalardo, Cassini project scientist at NASA's Jet Propulsion Laboratory in Pasadena, Calif. "The Cassini teams will be delving into the data to better understand the workings of this bizarre, active moon."

Scientists are particularly interested in the tiger stripes, which are fissures in the south polar region, because they spew jets of water vapor and other particles hundreds of kilometers, or miles, from the surface. This flyby was scientists' last peek at the tiger stripes before the south pole fades into the darkness of winter for several years. The thermal imaging work focused on the tiger stripe known as Baghdad Sulcus.

The Nov. 21 encounter, which is sometimes called "E8" because it is the eighth targeted flyby of Enceladus, brought Cassini to within about 1,600 kilometers (1,000 miles) of the moon's surface, at around 82 degrees south latitude. Cassini is now cruising toward Rhea, another one of Saturn's moons, for more imaging and mapping work. 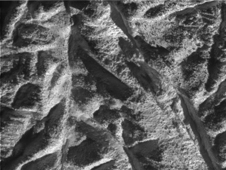 This unprocessed image was captured by NASA's Cassini spacecraft during its Nov. 21, 2009 flyby of Saturn's moon Enceladus. It shows the ridges and fractures on the surface of the icy moon. Image credit: NASA/JPL/Space Science Institute
› Full image and caption

To see a full gallery of raw images, click here. For more information on the flyby, click here.