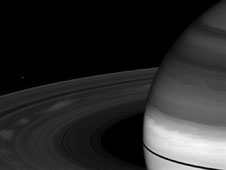 Massive, bright clouds of tiny ice particles hover above the darkened rings of Saturn in an image captured by the Cassini spacecraft on Sept. 22, 2009, around the time of Saturn's equinox. Image credit: NASA/JPL/Space Science Institute
› Larger image

Massive, bright clouds of tiny ice particles hover above the darkened rings of Saturn in an image captured by the Cassini spacecraft on Sept. 22, 2009, around the time of Saturn's equinox.

During this period, sunlight hits the rings edge-on and shines directly over the equator. The levitating icy particle clouds, which are known as "spokes" and are as wide as 10,000 kilometers (6,000 miles), appear particularly dramatic because of the unique lighting geometry of the equinox period.

The particles that make up spokes levitate above the ring plane when they acquire an electrostatic charge, the way static electricity on Earth can raise the hair on your arms. The spoke particles appear to acquire more charge during dim conditions and, during equinox, the bulk of the rings are in shadow. That angle of light also brightens features that stick out of the ring plane.

Saturn's exact equinox was Aug. 11, 2009, but there were extreme lighting conditions a few weeks before and after that date. Cassini's wide-angle camera captured this image six weeks later, when the spacecraft was about 1.3 million kilometers (808,000 miles) away from Saturn. The spokes appear in Saturn's B ring. Scientists are not yet sure how high these spokes hover above the ring plane. The bright dot on the left side of the image is Saturn's moon Janus.

Spokes in Saturn's rings were first discovered in the late 1980s by NASA's Voyager spacecraft. The features disappeared from view between 1998 and 2005, likely because of the angle of sunlight on the rings. To learn more about spokes, click here. A movie of spokes dancing around the rings in 2008 is available here.