"Unlike the hazy, broad, global bands of clouds regularly seen in Saturn's upper atmosphere, many of the deeper clouds appear to be isolated, localized features," said Dr. Kevin H. Baines, a member of the visual and infrared mapping spectrometer team from NASA's Jet Propulsion Laboratory, Pasadena, Calif. "They come in a large variety of sizes and shapes, including circular and oval shapes, donut shapes, and swirls." 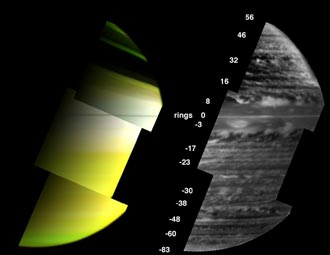 Image above: New images provided by the visual infrared mapping spectrometer on the Cassini spacecraft reveal a diverse array of clouds in the depths of Saturn. Image credit: NASA/JPL/University of Arizona
+ Full image and caption

These clouds are deep in the atmosphere, about 30 kilometers (19 miles) underneath the upper clouds usually seen on Saturn. They also behave differently from those in the upper atmosphere and are made of different materials. They are made of either ammonium hydrosulfide or water, but not ammonia -- generally thought to comprise the upper clouds.

Scientists are using the motions of these clouds to understand the dynamic weather of Saturn's deep atmosphere and get a three-dimensional global circulation picture of Saturn. They have mapped low-altitude winds over nearly the entire planet. Comparing these winds to the winds at higher altitudes has led them to conclude that substantial wind shears exist at Saturn's equator. These shears are similar to wind shear observed by Galileo at Jupiter, indicating that similar processes occur on both planets. The new wind speeds measured by the mapping spectrometer shows that winds blow about 275 kilometers per hour (170 miles per hour) faster deeper down than in the upper atmosphere.

Besides the donut-shaped and other localized cloud systems, dozens of planet girdling lanes of clouds also appear in the new images. Such lanes -- known as "zones"-- are commonly seen in the upper clouds of Saturn and the other large planets. However, these deeper-level lanes are surprisingly narrow and more plentiful than seen elsewhere, including the upper clouds of Saturn. They also have a much more thread-like structure than normally seen in Jupiter or Saturn’s upper atmosphere, with many of the thread-like structures and swirls connected to discrete cloud "cells," which look like convective cells on Earth.

The visual and infrared mapping spectrometer took high-resolution, near-infrared images of the deep clouds during four close passes of Saturn between February and July of this year. The images were at a wavelength seven times greater than visible to the human eye and five times greater than available to the Cassini visual camera.

The scientists used a new technique that allowed them to image the deep clouds silhouetted against the background radiation of heat generated by the planet’s interior. Until now, imaging clouds in the depths of Saturn has not been practical since upper-level hazes and clouds obscure the view.

"Instead of using sunlight as the source of radiation for imaging the deep clouds residing underneath the obscuring layer of upper-level clouds, we developed a new technique that uses Saturn’s own thermal heat as a source of light," said Baines. "It’s like looking down at a well-lit city from an aircraft at night, and seeing the black areas against the city lights, which tells you there is a cloud there blocking the light. Saturn emits its own radiant glow, which looks much like the glow of city lights at night."

Tracking these thermally-backlit clouds for several days enabled the determination of wind speeds at the deepest levels ever measured on Saturn.

"Understanding cloud development in the depths of Saturn will sharpen our understanding of global circulation throughout Saturn and of the major planets," said Baines.

These findings were presented in a news briefing at the 37th Annual Meeting of the Division for Planetary Sciences meeting held this week in Cambridge, England.

More information on the Cassini-Huygens mission is available at http://saturn.jpl.nasa.gov and http://www.nasa.gov/cassini .

The Cassini-Huygens mission is a cooperative project of NASA, the European Space Agency and the Italian Space Agency. JPL, a division of the California Institute of Technology in Pasadena, manages the Cassini-Huygens mission for NASA's Science Mission Directorate, Washington, D.C. The Cassini orbiter was designed, developed and assembled at JPL. The visual and infrared mapping spectrometer team is based at the University of Arizona.