Saturn's Moon Titan: Planet Wannabe
Interview with Jonathan Lunine
In January 2005, the European Space Agency's (ESA's) Huygens Probe will descend through Titan's atmosphere, sending back a detailed picture of the chemical interactions taking place there and, hopefully, giving scientists a glimpse into the chemistry that took place on early, prebiotic Earth. The Huygens Probe is part of the Cassini-Huygens mission to explore Saturn and its rings and moons. Titan is the only moon in our solar system with an atmosphere. Organic chemistry detected in that atmosphere has sparked the imagination of planetary scientists like Lunine. Lunine is the only U.S. scientist selected by the ESA to participate in the three-member Huygens Probe interdisciplinary science team. 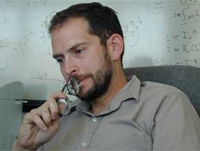 Image Right: Jonathan Lunine of the Lunar and Planetary Laboratory at the University of Arizona. Credit: space.com

Astrobiology Magazine (AM): One of the major goals of the Cassini-Huygens mission is to explore Titan. What makes this distant moon so interesting? 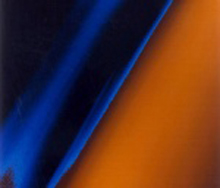 Image Left: The haze of an atmospheric layer on Saturn's moon, Titan. With an atmosphere thicker than Earth's, and composed of many biochemically interesting molecules (methane, hydrogen and carbon), Titan's rich chemistry will continue to interest astrobiologists as they look forward to landing a probe on its surface in 2004-5. Credit: Voyager Project, JPL, NASA

Because Titan's in orbit around Saturn, though, and not in orbit around the sun, it kind of gets a bad rep. People ignore it; they think of it as if it were a moon; and it is a moon, but it's a moon with an atmosphere. And it's large enough that probably a lot of the phenomena that we see going on on Earth are going on there -- except for biology.

JL: That's one of the three great questions about Titan: Why does Titan have that atmosphere, and Ganymede and Callisto do not? Ganymede and Callisto and Titan are all just about the same size and the same mass, so they have the same density, which means roughly the same composition. And so they're cookie-cutter moons that are formed by the same process. They're the biggest moons, apparently, that can be formed by giant planets, at least as far as we know. Why Titan is different in terms of having an atmosphere is one of the key questions that we don't know the answer to. 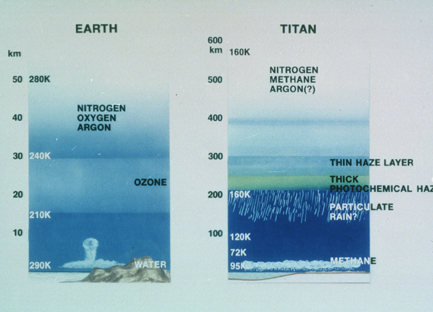 One possibility is that because Saturn is farther from the sun (than Jupiter), it was colder during formation. Gasses that could be trapped in the ice at those temperatures and that would have made their way into Titan might not have been trapped at temperatures where Jupiter formed. And therefore Ganymede and Callisto would not have acquired large amounts of nitrogen and methane and so on. A different possibility is that because Jupiter has higher gravity, the impact speeds [of comets] are larger at Jupiter than at Saturn. And so Ganymede and Callisto, in this other picture, would have started out with gas but it would have been ripped away by these impacts. I personally much, much prefer the first story, which was that the ambient conditions were colder at Saturn, and that allowed these very volatile gasses to be trapped in the planet-building material and find their way to Titan.

AM: Will Cassini-Huygens be able to answer the question of how Titan acquired an atmosphere?

JL: I think it will be able to address it in a fairly significant way by being able to gauge the origin of the nitrogen on Titan. If nitrogen on Titan came from ammonia, then we know that it would have been very effectively trapped in the water ice, much better than argon, for example, which is an abundant noble gas. If the nitrogen came in as molecular nitrogen (N2), it would have been trapped to about the same extent as argon - a little bit worse. And so one way to get at this is to measure the argon-to-nitrogen ratio in Titan. If it's high, if it's more than 1 percent, then probably nitrogen came in as N2, and conditions then were really cold at Titan, and that would say: Yeah, this was a temperature difference issue.

If, instead, the argon-to-nitrogen ratio is very, very small, then probably the nitrogen originated as ammonia. Ammonia's not quite as volatile, and could have been present at Jupiter as well as at Titan, and so we'd still be left with something of a mystery in that case. The best Voyager analysis, which actually took almost 20 years after Voyager to get right, puts an upper limit of about 6 percent on the argon abundance. And that's not quite good enough to do the comparison. We really need Cassini.