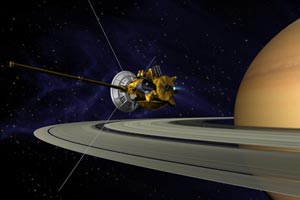 On July 1, 2004, the Cassini spacecraft will arrive at Saturn. This will mark the end of the spacecraft's journey through the Solar System as well as the beginning of its tour of Saturn, its rings, moons and magnetosphere.

Cassini will approach Saturn from below the ring plane. The spacecraft will cross through the large gap between the F Ring and G Ring. At this time Cassini will be 158,500 kilometers (about 98,500 miles) from Saturn's center. This crossing will occur one hour and 52 minutes prior to the spacecraft's closest approach to Saturn.

In order to slow the spacecraft enough to be captured by Saturn's gravity, Cassini's main engine will be turned to face the direction of travel. The resulting thrust from the engine will act as a braking device, which will slow down the spacecraft as it enters Saturn's orbit. The burn will place Cassini in a highly elliptical orbit.

Cassini's closest approach to Saturn during the entire four-year tour will occur during this burn. The spacecraft's distance from Saturn will be about 18,000 kilometers (about 11,187 miles), less then a sixth of Saturn's diameter.

Cassini will continue to coast above the rings for approximately one hour and 44 minutes before its descent back through the ring plane.

The Saturn Orbit Insertion (SOI) burn is critical to the success of the mission at Saturn. The spacecraft's close proximity to the planet and its rings provide a unique opportunity for an in-depth study of the planet. Instruments onboard the spacecraft will conduct studies in waves, particles and imaging data.
Cassini Mission
NASA's Jet Propulsion Laboratory
› Back To Top