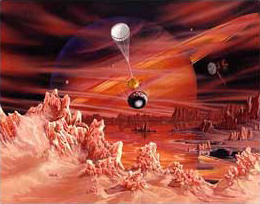 The Huygens probe will usher in 2005 with its landmark mission at Titan. After a seven-year journey strapped to the side of the Cassini Orbiter, Huygens will be set free on Dec. 25, 2004. The Probe will coast for 20 days en route to Titan.

Prior to the probe's separation from the orbiter, the "coast" timer will be loaded with the precise time necessary to turn on the probe systems (15 minutes before the initial encounter with Titan's atmosphere). Then the probe will separate from the orbiter and coast to Titan for 20 days with no systems active except for its wake-up timer.

Huygens will separate from Cassini at 30 centimeters (about 12 inches) per second and a spin rate of seven revolutions per minute to ensure stability during the coast and entry phase. Five days following the release of the probe, Cassini will perform a deflection maneuver. This will place the orbiter in the proper geometry to collect the data during the probe mission. The probe will continue in this mode until it reaches the top of Titan's atmosphere.

Huygens is equipped with six science instruments designed to study the content and dynamics of Titan's atmosphere and collect data and images on the surface. 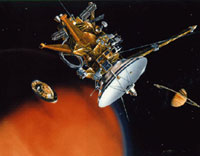 Huygens will make a parachute-assisted descent through Titan's atmosphere, collecting data as the parachutes slow the probe from super sonic speeds. Five batteries onboard the probe are sized for a Huygens mission duration of 153 minutes, corresponding to a maximum descent time of 2.5 hours plus at least 3 additional minutes (and possibly a half hour or more) on Titan's surface. These batteries are capable of generating 1800 Watt-hours of electricity.

The probe's radio link will be activated early in the descent phase, and the orbiter will "listen" to the probe for the next three hours, which includes the descent plus 30 minutes after impact. Not long after the end of this three-hour communication window, Cassini's high-gain antenna (HGA) will be turned away from Titan and toward Earth.

At this speed, the parachute deployment sequence initiates, starting with a mortar pulling out a Pilot Parachute which, in turn, pulls away the aft cover and deploys the Main Parachute. After inflation of the 8.3 meter (27.2 feet) diameter main parachute, the front shield is released to fall from the Descent Module. 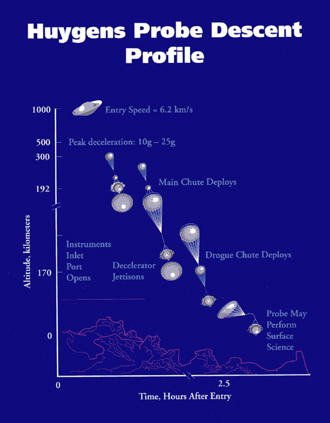 Then, after a 30 second delay built into the sequence to ensure that the shield is sufficiently far away to avoid instrument contamination, the Gas Chromatograph Mass Spectrometer (GCMS) and Aerosol Collector and Pyrolyser (ACP) inlet ports open and the Huygens Atmospheric Structure Instrument (HASI) boom deploy. The Descent Imager/Spectral Radiometer (DISR) cover is ejected two minutes later.

The main parachute is sized to pull the Descent Module safely out of the front shield. It is jettisoned after 15 minutes to avoid a protracted descent and a smaller 3-meter (10-foot) diameter parachute is deployed. The descent will last between two and two and half hours.

During its descent, Huygens' camera will capture more than 1,100 images, while the Probe's other five instruments will sample Titan's atmosphere and determine its composition.

Data from Huygens will be relayed to the Cassini Orbiter passing overhead. The data will be stored onboard Cassini's Solid State recorders (SSR) for playback to Earth.

Huygens is managed by the European Space Agency. Complete details on the mission objectives and science can be found on the ESA Huygens Site.
Cassini Mission
NASA's Jet Propulsion Laboratory
› Back To Top