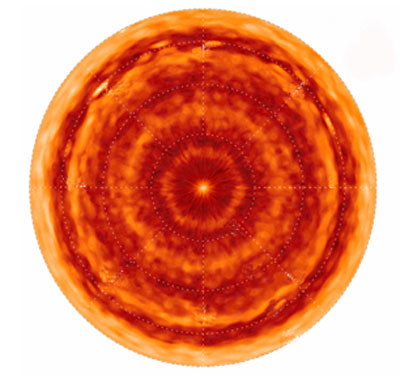 This image shows the unexpected "hot spot" at Saturn's north pole. Scientists were surprised to find that the north pole, despite being in winter darkness for more than a decade, is home to a hot, cyclonic vortex very similar to that found on Saturn's much sunnier south pole.

Created with data from the Cassini spacecraft's composite infrared spectrometer, this image, centered on the north pole, shows temperatures in Saturn's northern hemisphere near its 100-millibar tropopause, the top of its convective layer.

The false color denotes temperatures from 72 to 84 Kelvin (about 330 to 310 degrees below zero Fahrenheit). Latitudes are displayed from 30 degrees N at the edges to the north pole in the center. The hot pole is clear at the center of the projection. The distinctive polar hexagon is also evident in the initial warm "ring" around the pole between 75 and 80 degrees North latitude.

Although there is a similar hot pole in the southern hemisphere, there is no hexagon and the atmosphere is otherwise much warmer than in the north, having been heated during Saturn's southern summer for over a decade.

The Cassini-Huygens mission is a cooperative project of NASA, the European Space Agency and the Italian Space Agency. The Jet Propulsion Laboratory, a division of the California Institute of Technology in Pasadena, manages the mission for NASA's Science Mission Directorate, Washington, D.C. The Cassini orbiter was designed, developed and assembled at JPL. The composite infrared spectrometer team is based at NASA's Goddard Space Flight Center, Greenbelt, Md.