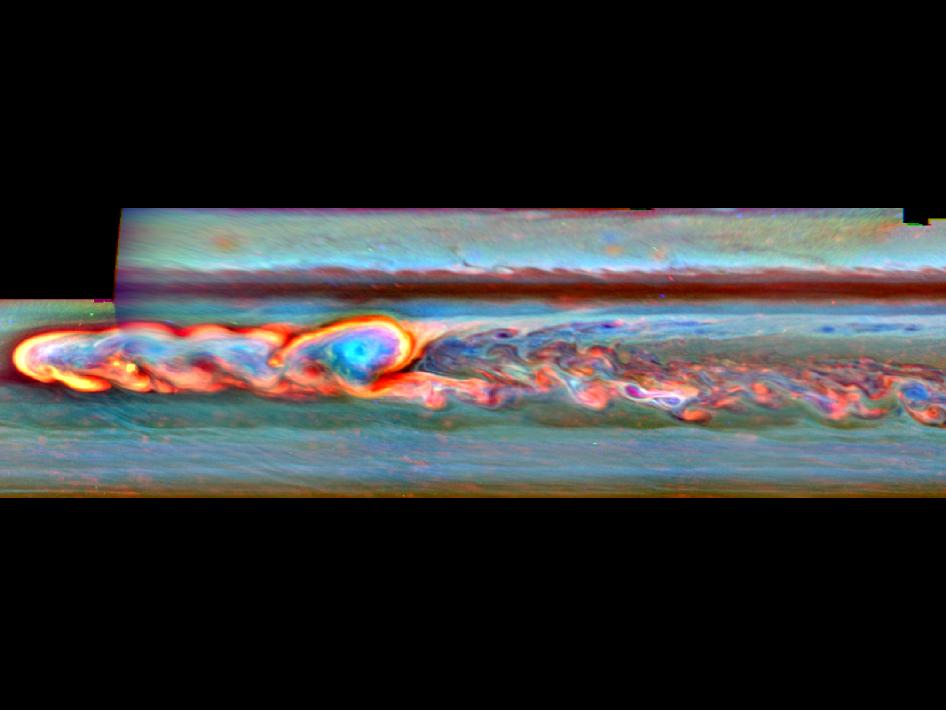 First Chapter of the Northern Storm

This mosaic of false-color images from NASA's Cassini spacecraft shows what a giant storm in Saturn's northern hemisphere looked like about a month after it began. The bright head of the storm is on the left. The storm also spawned a clockwise-spinning vortex, seen as the light blue circular feature framed with a curl of bright clouds a little to the right of the storm head.

The colors indicate the altitudes of the clouds - red is the lowest, green is an intermediate level and blue is the highest. White indicates thick clouds at a high altitude. Scientists assigned red to a wavelength of radiation that penetrates the atmosphere deep down to the top of the tropospheric cloud deck (750 nanometers). The troposphere is the part of the atmosphere where weather occurs. They assigned green to the 728-nanometer wavelength. Blue is a wavelength band that penetrates only to the top of tropospheric haze (890 nanometer).

The Cassini-Huygens mission is a cooperative project of NASA, the European Space Agency and the Italian Space Agency. NASA's Jet Propulsion Laboratory, a division of the California Institute of Technology in Pasadena, manages the mission for NASA's Science Mission Directorate, Washington. The Cassini orbiter was designed, developed and assembled at JPL. The Cassini orbiter and its two onboard cameras were designed, developed and assembled at JPL. The imaging operations center is based at the Space Science Institute in Boulder, Colo.

For more information about the Cassini-Huygens mission, visit http://www.nasa.gov/cassini and http://saturn.jpl.nasa.gov/.