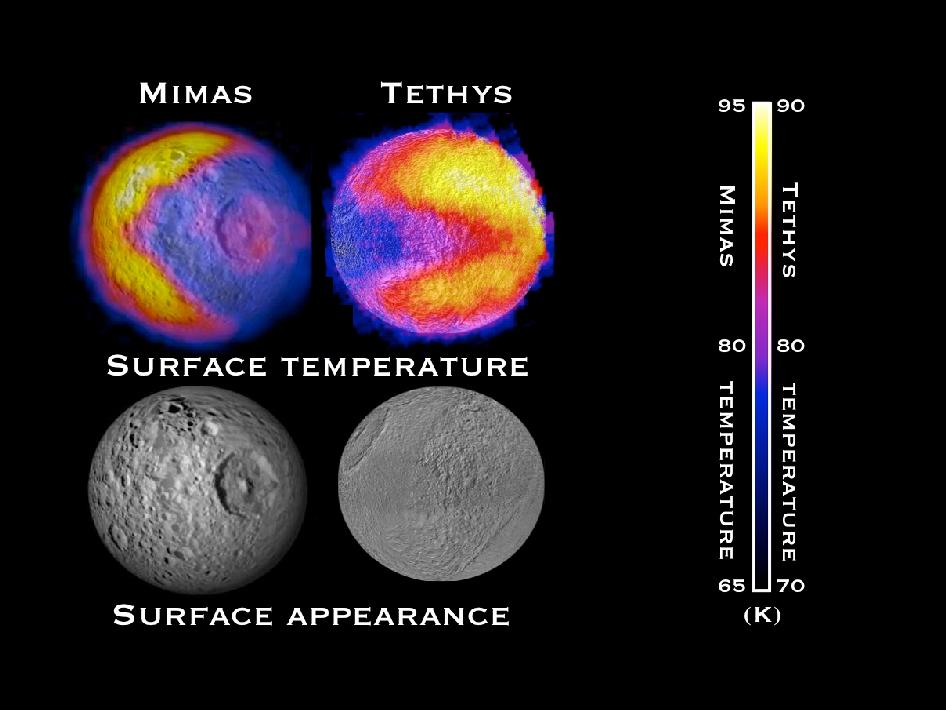 Scientists with NASA's Cassini mission have spotted two features shaped like the 1980s video game icon "Pac-Man" on moons of Saturn. One was observed on the moon Mimas in 2010 and the latest was observed on the moon Tethys. The pattern appears in thermal data obtained by Cassini's composite infrared spectrometer, with warmer areas making up the Pac-Man shape.

At Tethys, unlike Mimas, the Pac-Man pattern can also be seen subtly in visible-light images of the surface, as a dark lens-shaped region. This brightness variation was first noticed in an image from NASA's Voyager spacecraft in 1980. (A good view of this region can be seen in PIA01392.)

Scientists theorize that the Pac-Man thermal shape on the Saturnian moons occurs because high-energy electrons bombard low latitudes on the side of the moon that faces forward as it orbits around Saturn, turning a fluffy surface into hard-packed ice. As a result, the altered surface does not heat as rapidly in the sunshine or cool down as quickly at night as the rest of the surface, similar to how a boardwalk at the beach feels cooler during the day but warmer at night than the nearby sand. Finding another PacMan on Tethys confirms that high-energy electrons can dramatically alter the surface of an icy moon. Also, because the altered region on Tethys, unlike on Mimas, is also bombarded by icy particles from Enceladus' plumes, it implies the surface alteration is occurring more quickly than its recoating by plume particles.

The Cassini-Huygens mission is a cooperative project of NASA, the European Space Agency and the Italian Space Agency. NASA's Jet Propulsion Laboratory, Pasadena, Calif., a division of the California Institute of Technology in Pasadena, manages the mission for NASA's Science Mission Directorate, Washington, D.C. The Cassini orbiter was designed, developed and assembled at JPL. The composite infrared spectrometer team is based at NASA's Goddard Space Flight Center in Greenbelt, Md., where the instrument was built.