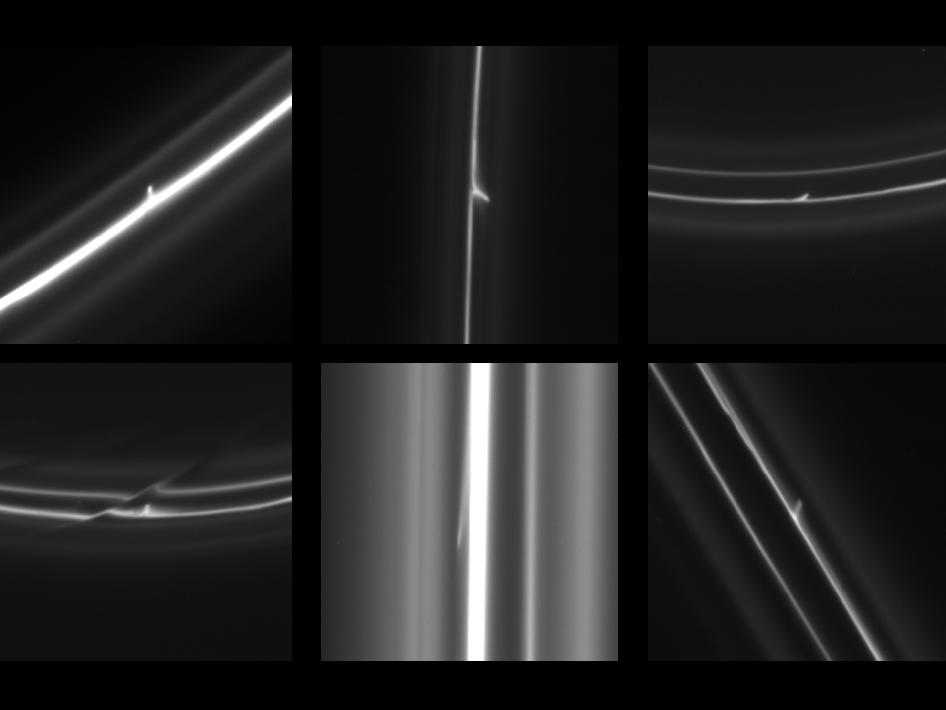 This set of six images obtained by NASA's Cassini spacecraft shows trails that were dragged out from Saturn's F ring by objects about a half mile (1 kilometer) in diameter. Scientists have seen more than 500 of these kinds of trails in over 20,000 images collected by Cassini from 2004 to 2011. The trails seen in this set are typical of the entire collection. From left to right in the top row, the trails in these images are 18, 85 and 96 miles long (29, 136 and 155 kilometers long). In the bottom row from left to right, the trails are 43, 129 and 32 miles long (69, 207 and 51 kilometers long).

The trails are also called "mini-jets" by Cassini scientists. Scientists believe they were originally formed by the pull of the moon Prometheus, which averages about 53 miles or 86 kilometers across, on tiny F ring particles.

As Prometheus works its way around Saturn, its gravitational attraction sometimes parts channels in the icy particles of Saturn's F ring and sometimes pushes together sticky snowballs. The moon's continued progress around Saturn pulls some of the snowballs apart over time and adds material to others. These trails appear to be the telltale signs of surviving, evolved snowballs that strike through the F ring on their own. Scientists have been able to use Cassini images to track the objects and be sure they have different orbits from the F ring. The collisions occur at gentle speeds, on the order of 4 mph (2 meters per second). The F ring is the outermost of Saturn's main rings, with a radius of about 87,129 miles (140,220 kilometers).

The Cassini-Huygens mission is a cooperative project of NASA, the European Space Agency and the Italian Space Agency. NASA's Jet Propulsion Laboratory, a division of the California Institute of Technology in Pasadena, manages the mission for NASA's Science Mission Directorate, Washington, D.C. The Cassini orbiter was designed, developed and assembled at JPL. The imaging operations center is based at the Space Science Institute in Boulder, Colo.