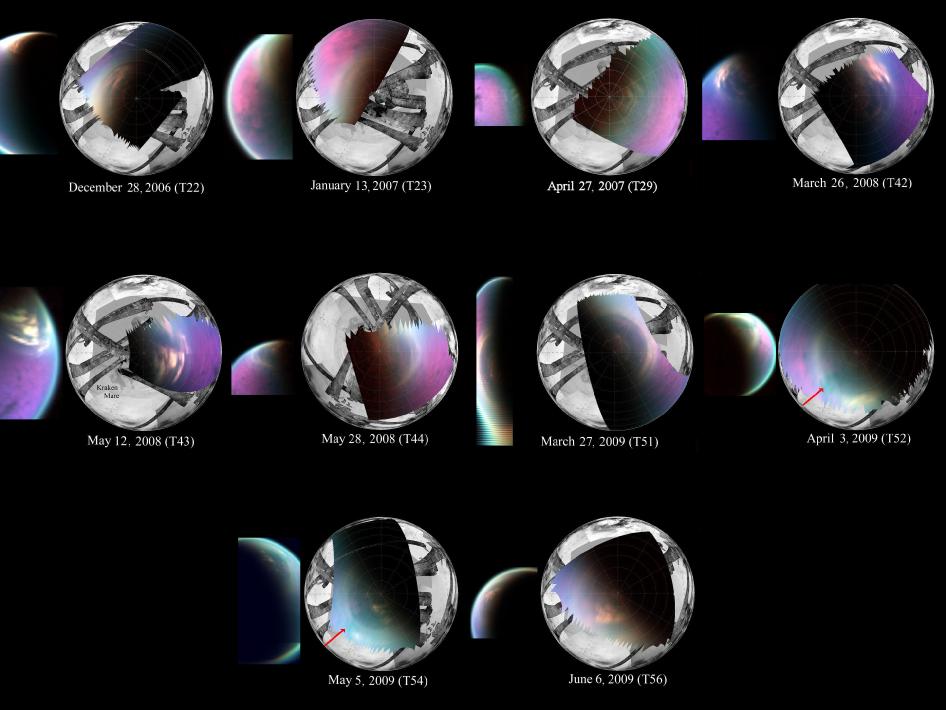 This series of images obtained by NASA's Cassini spacecraft shows several views of the north polar cloud covering Saturn's moon Titan. The false-color images were obtained by Cassini's visual and infrared mapping spectrometer (VIMS). They can be seen on the left of each pair of images, with that same image re-projected onto a globe of Titan on the right. The global image shows Titan's north pole at the center. Other parts of the Titan globe are filled in using data from Cassini's imaging cameras and radar instrument.

The VIMS images cover 2006 to 2009, when Titan was transitioning from northern winter to northern spring. In 2006, the north polar cloud appeared dense and opaque. But in spectrometer images obtained around the 2009 equinox, when the sun was directly over Saturn and Titan's equators and northern winter was turning into spring, the cloud appeared much thinner and patchier. It allowed scientists to see the underlying northern lakes and seas on the surface, including Kraken Mare (at the end of the red arrows). The northern seas and lakes, made of liquid hydrocarbons, look like dark jigsaw puzzle pieces in the false-color images.

The Cassini-Huygens mission is a cooperative project of NASA, the European Space Agency and the Italian Space Agency. NASA's Jet Propulsion Laboratory, a division of the California Institute of Technology in Pasadena, manages the mission for NASA's Science Mission Directorate, Washington, DC. The Cassini orbiter was designed, developed and assembled at JPL. The visual and infrared mapping spectrometer was built by JPL, with a major contribution by the Italian Space Agency (ASI). The visual and infrared mapping spectrometer science team is based at the University of Arizona, Tucson. The imaging operations center is based at the Space Science Institute in Boulder, Colo. The radar instrument was built by JPL and the ASI, working with team members from the United States and several European countries.