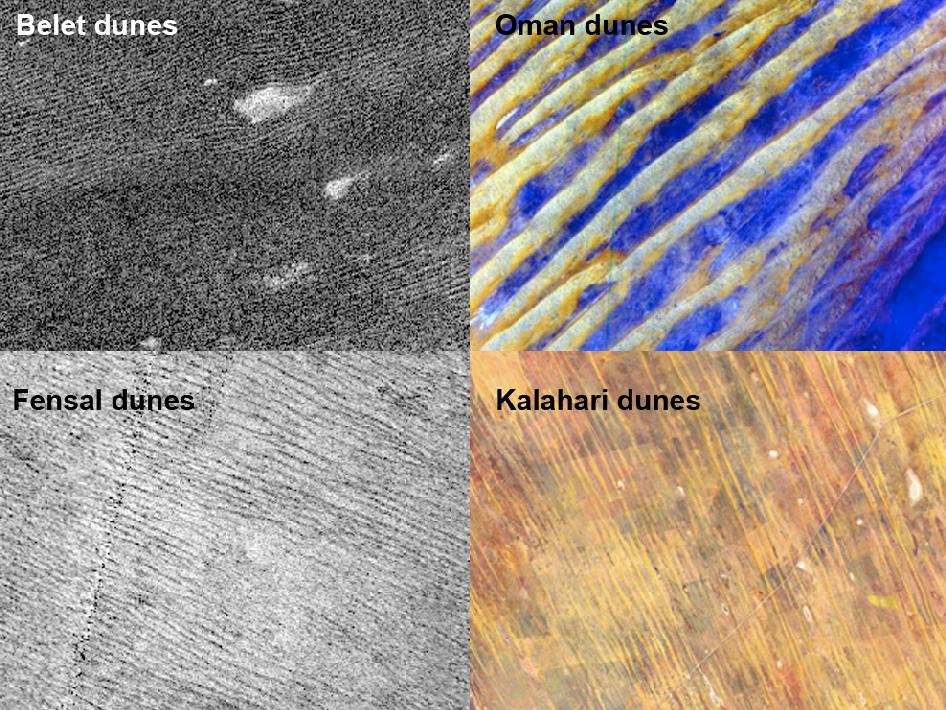 Data from NASA's Cassini spacecraft show that the sizes and patterns of dunes on Saturn's moon Titan vary as a function of altitude and latitude. The dunes in areas that are more elevated or are higher in latitude, such as in the Fensal region pictured at bottom left, tend to be thinner and more widely separated, with gaps that have a thinner covering of sand. Dunes in the Belet region, pictured at top left, are at a lower altitude and latitude. The dunes in Belet are wider, with thicker blankets of sand between them. The Kalahari dunes in South Africa and Namibia, located in a region with limited sediment available and pictured at bottom right, show effects similar to the Fensal dunes. The Belet dunes on Titan resemble Earth's Oman dunes in Yemen and Saudi Arabia, where there is abundant sediment available. The Oman dunes are shown at top right.

The altitude effect suggests that the "sand" (likely composed of hydrocarbons) needed to build the dunes is mostly in the lowlands of Titan. Saturn's elliptical orbit may explain why dunes tend to be thinner, more widely separated and less sand-covered in the areas in between dunes as one moves northward. Summers in the southern hemisphere are shorter and warmer than in the northern hemisphere, possibly leaving the soil in the south less moist because northern areas experience more evaporation and condensation. When soil is moist, it is more difficult to move sand particles because they are sticky and heavier. As a result, it is more difficult to build dunes..

The images of Belet and Fensal were obtained by Cassini's radar instrument on Oct. 28, 2005, and April 10, 2007. The images have been processed to show the same spatial scale and stretch. In these images, Titan's dunes are the dark streaks that are 0.6 to 1.2 miles (1 to 2 kilometers) wide and the areas between dunes (bright streaks) are 0.6 miles to 2.5 miles (1 to 4 kilometers) wide. Fensal appears much brighter in these radar images than Belet because there is a thinner sand cover in the areas between the dunes. These interdune areas are also wider than Belet's. The image of the Oman dunes, also known as dunes in the Rub' al Khali or Empty Quarter, was obtained by the Advanced Spaceborne Thermal Emission and Reflection Radiometer (ASTER), an instrument aboard NASA's Terra satellite. For more information, see PIA02656.

The image of the Kalahari dunes, in the Namib Desert, was also obtained by ASTER.

For more information on this image, visit http://earthobservatory.nasa.gov/IOTD/view.php?id=76579 .