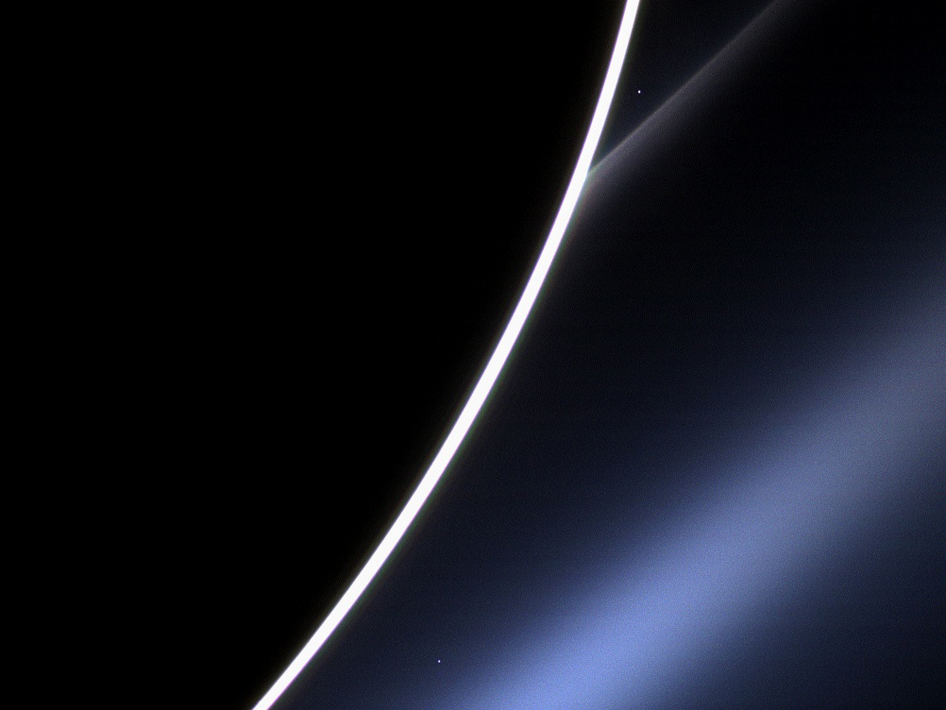 Dawn on Saturn is greeted across the vastness of interplanetary space by the morning star, Venus, in this image from NASA's Cassini spacecraft. Venus appears just off the edge of the planet, in the upper part of the image, directly above the white streak of Saturn's G ring. Lower down, Saturn's E ring makes an appearance, looking blue thanks to the scattering properties of the dust that comprises the ring. A bright spot near the E ring is a distant star.

Venus is, along with Mercury, Earth, and Mars, one of the rocky "terrestrial" planets in the solar system that orbit relatively close to the sun. Though Venus has an atmosphere of carbon dioxide that reaches nearly 900 degrees Fahrenheit (500 degrees Celsius) and a surface pressure 100 times that of Earth's, it is considered a twin to our planet because of their similar size, mass, rocky composition and orbit. Venus is covered in thick sulfuric acid clouds, making it very bright.

This view looks toward the unilluminated side of the rings from about 21 degrees below the ring plane.

Images taken using red, green and blue spectral filters were combined to create this natural color view. The images were obtained with the Cassini spacecraft wide-angle camera on Jan. 4, 2013, at a distance of approximately 371,000 miles (597,000 kilometers) from Saturn. Image scale is 20 miles (32 kilometers) per pixel.