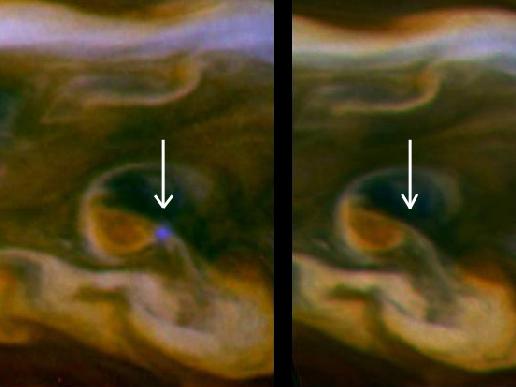 These false color mosaics from NASA's Cassini spacecraft capture lightning striking within the huge storm that encircled Saturn's northern hemisphere for much of 2011.

See PIA14904 for a mosaic showing a wider view wrapping around the planet also in which some blue lightning is visible in the clouds.

The white arrow in the annotated version of this panel points to the location where the lightning occurred in the clouds. The optical energy of this and other flashes on Saturn is comparable to the strongest of the flashes on Earth. The flash is approximately 120 miles (200 kilometers) in diameter when it exits the tops of the clouds. From this, scientists deduce that the lightning bolts originate in the clouds deeper down in Saturn's atmosphere where water droplets freeze. This is analogous to where lightning is created on Earth.

This lightning flash appears only in the filter sensitive to blue visible light, and the images were enhanced to increase the visibility of the lightning.

The images were obtained with the Cassini spacecraft narrow-angle camera on March 6, 2011, at a distance of approximately 2 million miles (3.3 million kilometers) from Saturn and at a sun-Saturn-spacecraft, or phase, angle of 83 degrees. These mosaics are simple cylindrical map projections, defined such that a square pixel subtends equal intervals of latitude and longitude. At higher latitudes, the pixel size in the north-south direction remains the same, but the pixel size (in terms of physical extent on the planet) in the east-west direction becomes smaller. The pixel size is set at the equator, where the distances along the sides are equal. This map has a pixel size of 12 miles (20 kilometers) at the equator.