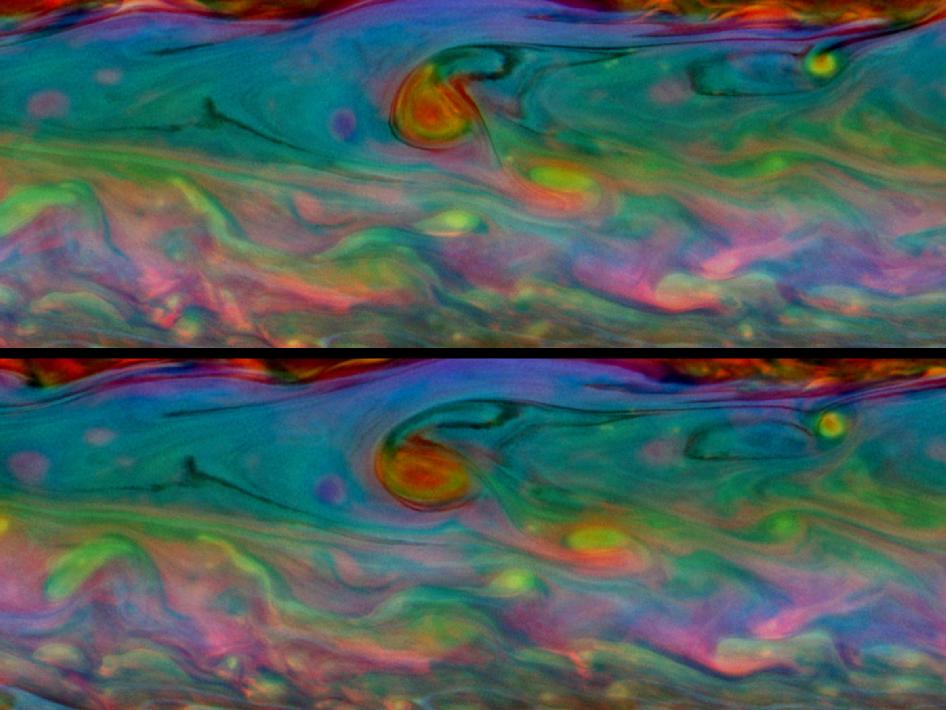 These two false-color views from NASA's Cassini spacecraft show detailed patterns that change during one Saturn day within the huge storm in the planet's northern hemisphere.

Taken about 11 hours -- or one Saturn day -- apart, these mosaics consist of 48 images each. The top mosaic was taken earlier than the bottom mosaic. Both mosaics were captured on Aug. 7, 2011, and each of the two batches of images was taken over about 2.5 hours.

Cassini scientists study the fine details contained in these mosaics to learn about wind speeds and cloud depths in the storm. For example, a red curlicue that indicates a deep cloud present when the top mosaic was captured may not appear or may have moved in bottom mosaic taken 11 hours later.

See PIA14905 to learn more about the development of this storm.

The views were acquired at a distance of approximately 1.5 million miles (2.4 million kilometers) from Saturn and at a sun-Saturn-spacecraft angle (phase angle) of 33 degrees. Both the top and bottom images are simple cylindrical map projections, defined such that a square pixel subtends equal intervals of latitude and longitude. At higher latitudes, the pixel size in the north-south direction remains the same, but the pixel size (in terms of physical extent on the planet) in the east-west direction becomes smaller. The pixel size is set at the equator, where the distances along the sides are equal. The images have a pixel size of 11 miles (18 kilometers) at the equator.

The Cassini-Huygens mission is a cooperative project of NASA, the European Space Agency and the Italian Space Agency. NASA's Jet Propulsion Laboratory, a division of the California Institute of Technology in Pasadena manages the mission for NASA's Science Mission Directorate, Washington. The Cassini orbiter and its two onboard cameras were designed, developed and assembled at JPL. The imaging team is based at the Space Science Institute, Boulder, Colo.