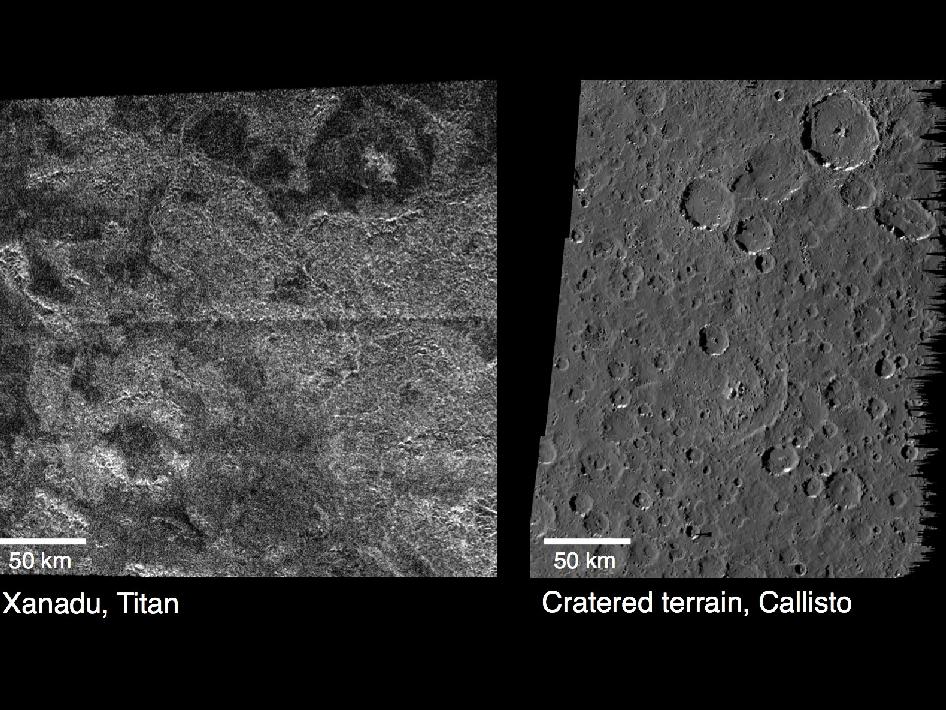 These images compare surface features observed by NASA's Cassini spacecraft at the Xanadu region on Saturn's moon Titan (left), and features observed by NASA's Galileo spacecraft on Jupiter's cratered moon Callisto (right). The Cassini radar image, obtained on a Titan flyby April 30, 2006, is centered on 10 degrees south latitude and 85 degrees west longitude. The Galileo camera image, obtained on June 25, 1997, is centered on 6 degrees south latitude and 7 degrees west longitude. Titan may originally have had a cratered landscape similar to Callisto that has since been eroded by rainfall and runoff. There are many large circular features in Titan's Xanadu region that have some of the characteristics of impact craters - such as central peaks and inward-facing circular cliffs - which make scientists think they are, in fact, eroded impact craters. The surface of Callisto also has a substantially eroded cratered landscape. Instead of erosion by weather, scientists theorize the erosion on Callisto was caused by ground ice evaporating away.

The Cassini-Huygens mission is a cooperative project of NASA, the European Space Agency and the Italian Space Agency. The Jet Propulsion Laboratory, a division of the California Institute of Technology in Pasadena, manages the mission for NASA's Science Mission Directorate. The Cassini orbiter was designed, developed and assembled at JPL. The radar instrument was built by JPL and the Italian Space Agency, working with team members from the United States and several European countries.

For more information about the Cassini-Huygens mission visit http://www.nasa.gov/cassini and http://saturn.jpl.nasa.gov