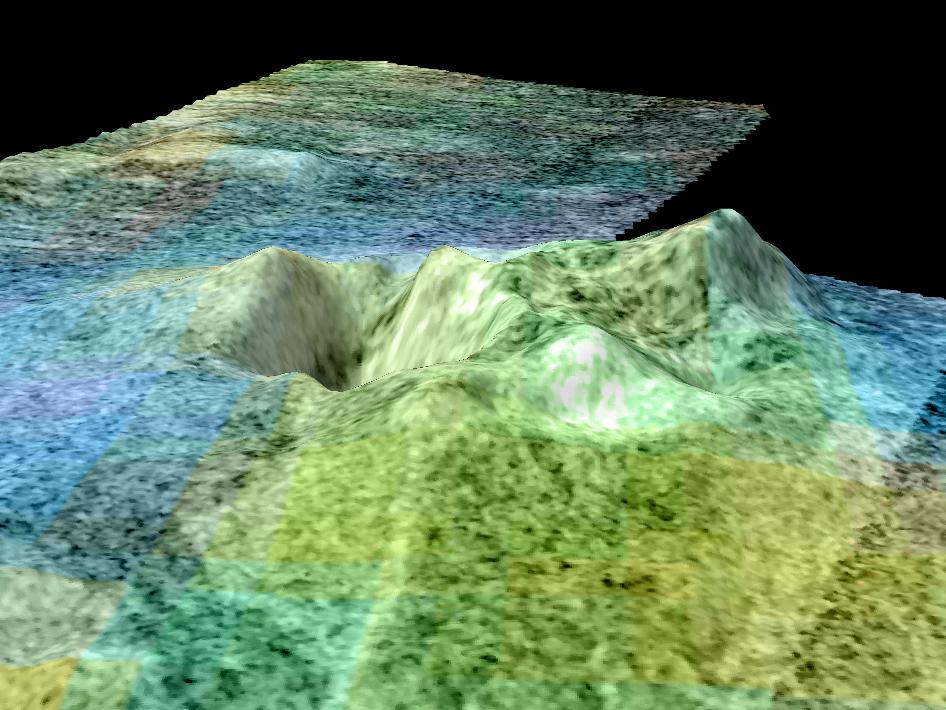 This image is based on data from NASA's Cassini spacecraft and shows a flyover of an area of Saturn's moon Titan known as Sotra Facula. Scientists believe Sotra is the best case for an ice volcano -- or cryovolcano -- region on Titan. The flyover shows two peaks more than 1,000 meters (3,000 feet) tall and multiple craters as deep as 1,500 meters (5,000 feet). It also shows finger-like flows. All of these are land features that indicate cryovolcanism. The 3-D topography comes from Cassini's radar instrument. Topography has been vertically exaggerated by a factor of 10. The false color in the initial frames shows different compositions of surface material as detected by Cassini's visual and infrared mapping spectrometer. In this color scheme, dunes tend to look relatively brown-blue. Blue suggests the presence of some exposed ice. Scientists think the bright areas have an organic coating that hides the ice and is different and lighter than the dunes. The finger-like flows appear bright yellowish-white, like the mountain and caldera. The second set of colors shows elevation, with blue being lowest and yellow and white being the highest. Dunes here appear blue because they tend to occupy low areas. The finger-like flows are harder to see in the elevation data, indicating that they are thin, maybe less than about 100 meters (300 feet) thick.

The Cassini-Huygens mission is a cooperative project of NASA, the European Space Agency and the Italian Space Agency (ASI). The Jet Propulsion Laboratory, a division of the California Institute of Technology, Pasadena, manages the mission for NASA's Science Mission Directorate, Washington. The Cassini orbiter was designed, developed and assembled at JPL. The radar instrument was built by JPL and ASI, working with team members from the U.S. and several European countries. The visual and infrared mapping spectrometer was built by JPL, with a major contribution by ASI. The visual and infrared mapping spectrometer science team is based at the University of Arizona, Tucson.