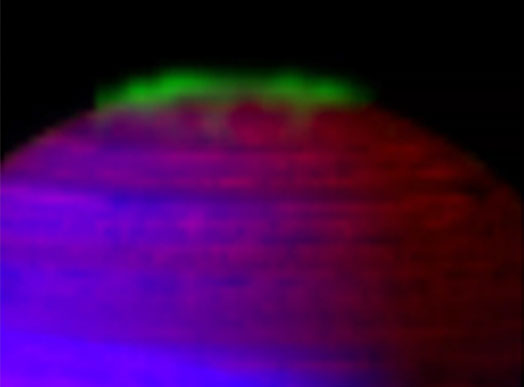 This movie, made from data obtained by NASA's Cassini spacecraft, shows Saturn's southern aurora shimmering over approximately 20 hours as the planet rotates. This video is among the first videos released from a study that extracts auroral emissions out of the entire catalogue of images taken by Cassini's visual and infrared mapping spectrometer.

In this movie constructed from data collected in the near-infrared wavelengths of light, the auroral emission is shown in green. The data represents emissions from hydrogen ions in of light between 3 and 4 microns in wavelength. In general, scientists designated blue to indicate sunlight reflected at a wavelength of 2 microns, green to indicate sunlight reflected at 3 microns and red to indicate thermal emission at 5 microns. Saturn's rings reflect sunlight at 2 microns, but not at 3 and 5 microns, so they appear deep blue. Saturn's high altitude haze reflects sunlight at both 2 and 3 microns, but not at 5 microns, and so it appears green to blue-green. The heat emission from the interior of Saturn is only seen at 5 microns wavelength in the spectrometer data, and thus appears red. The dark spots and banded features in the image are clouds and small storms that outline the deeper weather systems and circulation patterns of the planet. They are illuminated from underneath by Saturn's thermal emission, and thus appear in silhouette.

The movie covers just under two Saturnian days, from 2:15 p.m. UTC on Sept. 22, 2007 to 10:53 a.m. on Sept. 23, 2007. The spacecraft viewing angle stays the same, so that throughout the video. The aurora can clearly be seen to vary significantly over the period of the observation. On the noon and midnight sides (left and right, respectively), the aurora brightens significantly for extended periods of several hours, suggesting the brightening is connected with the direction of the sun. Other features appear to rotate with the underlying planet, suggesting that these are directly controlled by the direction of Saturn's magnetic field.

Scientists processed the auroral emissions to the fullest extent allowed by the spectrometer data.