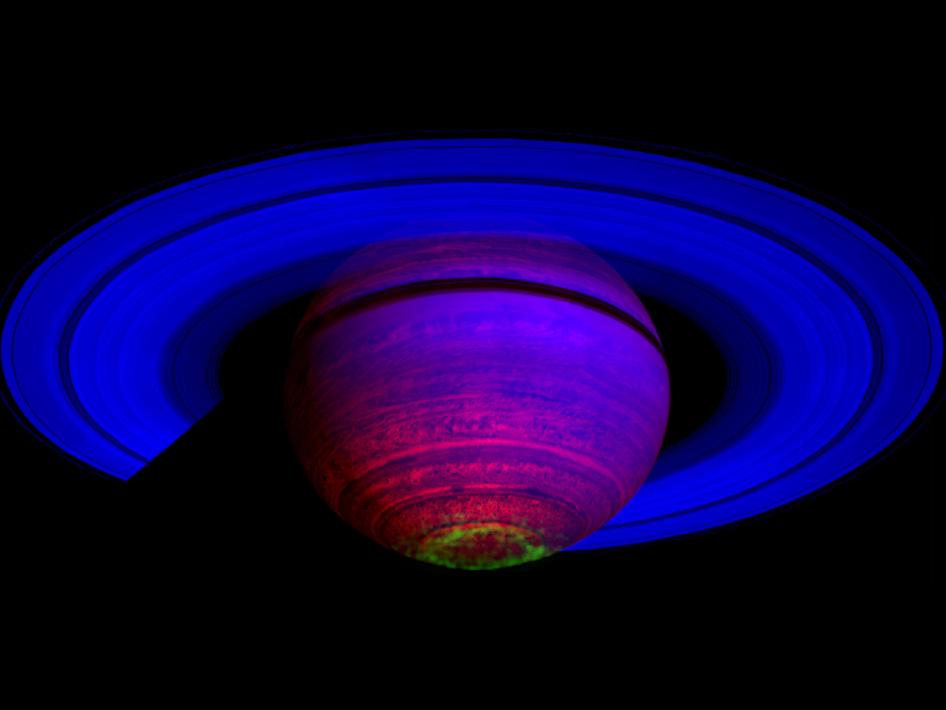 This false-color composite image, constructed from data obtained by NASA's Cassini spacecraft, shows the glow of auroras streaking out about 1,000 kilometers (600 miles) from the cloud tops of Saturn's south polar region. It is among the first images released from a study that identifies images showing auroral emissions out of the entire catalogue of images taken by Cassini's visual and infrared mapping spectrometer.

In this image constructed from data collected in the near-infrared wavelengths of light, the auroral emission is shown in green. Scientists designated blue to indicate sunlight reflected at wavelengths from 2 to 3 microns, green to indicate light from hydrogen ions at wavelengths between 3 and 4 microns and red to indicate thermal emission at 5 microns. Saturn's rings and high altitude haze only reflect sunlight at 3 microns or less, so they appear deep blue. The glow from the aurora can only be seen at the wavelengths in the green channel. The heat emission from the interior of Saturn is only seen at 5 microns wavelength in the spectrometer data, and thus appears red. The dark spots and banded features in the image are clouds and small storms that outline the deeper weather systems and circulation patterns of the planet. They are illuminated from underneath by Saturn's thermal emission, and thus appear in silhouette.

The composite image was made from 65 individual observations by Cassini's visual and infrared mapping spectrometer on Nov. 1, 2008. The observations were each six minutes long.