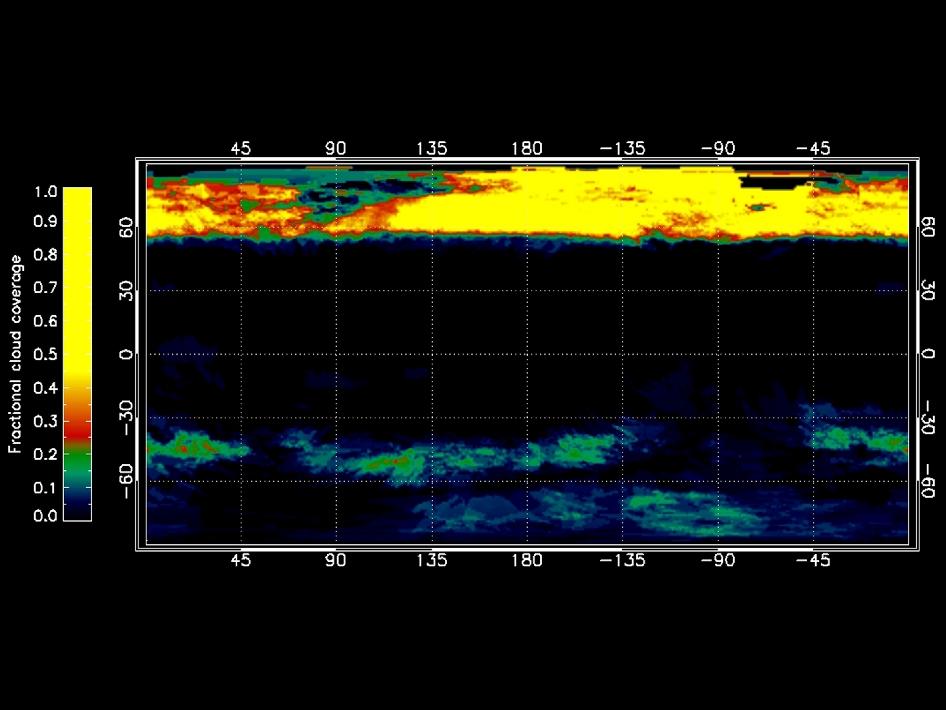 This graphic, constructed from data obtained by NASA's Cassini spacecraft, shows the percentage of cloud coverage across the surface of Saturn's moon Titan. The color scale from black to yellow signifies no cloud coverage to complete cloud coverage, over a period spanning July 2004 to April 2010.

Equinox, when the sun shone directly over the equator, occurred in August 2009. It brought a changing of the seasons, as Titan moved out of southern summer into northern spring.

During winter in the northern hemisphere, northern polar clouds of ethane formed in Titan's troposphere, the lowest part of the atmosphere, from a constant influx of ethane and aerosols from a higher part of the atmosphere known as the stratosphere. In the southern hemisphere, atmospheric gases enriched with methane welled up from the surface to produce mid- and high-latitude clouds.

The amount and location of cloud coverage on Titan provide clues to seasonal changes on the moon. During southern summer, Cassini scientists saw a thick vortex of clouds at Titan's north pole, and a thinner patch at the south pole. Wispier mid-latitude clouds sometimes appeared in the southern temperate zones. Scientists are closely watching to see if this picture will change as northern summer approaches. They will observe whether the south polar clouds grow as the north polar clouds dissipate, and whether northern temperate clouds appear as those in the south disappear.

The data for this graphic came from Cassini's visual and infrared mapping spectrometer.