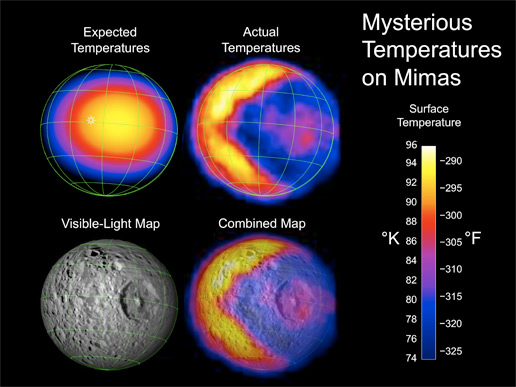 This figure illustrates the unexpected and bizarre pattern of daytime temperatures found on Saturn's small inner moon Mimas (396 kilometers, or 246 miles, in diameter). The data were obtained by the composite infrared spectrometer (CIRS) on NASA's Cassini spacecraft during the spacecraft's closest-ever look at Mimas on Feb. 13, 2010.

In the annotated version, the upper left image shows the expected distribution of temperatures. The white sun symbol shows the point where the sun is directly overhead, which is at midday close to the equator. Just as on Earth, the highest temperatures (shown in yellow) were expected to occur after midday, in the early afternoon.

The upper right image in the annotated version shows the completely different pattern that Cassini actually saw. Instead of the expected smoothly varying temperatures, this side of Mimas is divided into a warm part (on the left) and a cold part (on the right) with a sharp, v-shaped boundary between them. The warm part has typical temperatures near 92 Kelvin (minus 294 Fahrenheit), while typical temperatures on the cold part are about 77 Kelvin (minus 320 Fahrenheit). The cold part is probably colder because surface materials there have a greater thermal conductivity, so the sun's energy soaks into the subsurface instead of warming the surface itself. But why conductivity should vary so dramatically across the surface of Mimas is a mystery.

The lower two panels in the annotated version compare the temperature map to Mimas' appearance in ordinary visible light at the time of the observations. The map used to create this image is a mosaic of images taken by Cassini's imaging science subsystem cameras on previous flybys of Mimas. The cold side includes the giant Herschel Crater, which is a few degrees warmer than its surroundings. It's not yet known whether Herschel is responsible in some way for the larger region of cold temperatures that surrounds it.

The green grid shows latitudes and longitudes on Mimas at 30-degree intervals.

Cassini took 85 minutes to make the temperature map, as the spacecraft receded from Mimas. During that time, the distance to Mimas increased from 38,000 to 67,000 kilometers (24,000 to 42,000 miles) and the longitude of the center of Mimas' disk increased from 128 degrees west to 161 degrees west, due to the moon's rotation.

Because of this changing geometry, the alignment of the temperatures relative to specific features or coordinates on Mimas is shown only approximately. The temperatures were calculated from the brightness of the moon's infrared heat radiation, measured by CIRS at a wavelength of 12 to 16 microns, and are color coded according to the scale in the lower right of the annotated figure.

The unannotated version shows the imaging science subsystem visible-light mosaic of Mimas from previous flybys on the left. The right-hand image shows the new CIRS temperature data mapped on top of the visible-light image.

The Cassini-Huygens mission is a cooperative project of NASA, the European Space Agency and the Italian Space Agency. The Jet Propulsion Laboratory, a division of the California Institute of Technology in Pasadena, manages the mission for NASA's Science Mission Directorate, Washington, D.C. The composite infrared spectrometer team is based at NASA's Goddard Space Flight Center, Greenbelt, Md., where the instrument was built.

The imaging team is based at the Space Science Institute, Boulder, Colo.