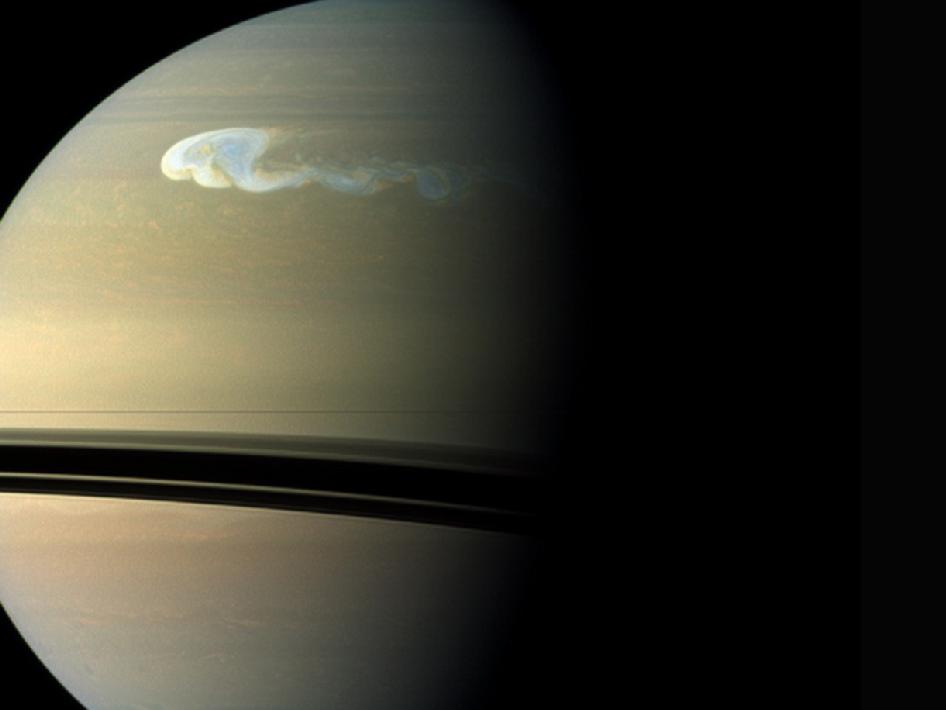 NASA's Cassini spacecraft captures a composite near-true-color view of the huge storm churning through the atmosphere in Saturn's northern hemisphere.

This storm is the largest and most intense observed on Saturn by NASA's Voyager or Cassini spacecraft. The storm is still active. As scientists have tracked this storm over several months, they have found it covers 500 times the area of the biggest of the southern hemisphere storms observed earlier in the Cassini mission (see PIA06197 and PIA12576). The shadow cast by Saturn's rings has a strong seasonal effect, and it is possible that the switch to powerful storms now being located in the northern hemisphere is related to the change of seasons after the planet's August 2009 equinox.

See PIA12825 for a false-color view taken about two months after this view, with the storm's tail encircling the planet and the latitudinal extent swollen to almost 9,000 miles (15,000 kilometers).

Periodic, huge storms called Great White Spots have been observed in previous Saturnian years (each of which is about 30 Earth years), usually appearing in late northern summer. Saturn is now experiencing early northern spring, so this storm, if it is a Great White Spot, is happening earlier than usual. This storm is about as large as the largest of the Great White Spots, which also encircled the planet but had latitudinal sizes ranging up to 12,000 miles (20,000 kilometers). The Voyager and Cassini spacecraft were not at Saturn for previous Great White Spot appearances.

This view looks toward the southern, unilluminated side of the rings from just below the ring plane.

Images taken using red, green and blue spectral filters are usually combined to create a natural color view. Because a visible red light image was not available, an image taken using a spectral filter sensitive to wavelengths of near-infrared light centered at 752 nanometers was used in place of red. So the color is close to natural color, but is not exact.

The images were taken with the Cassini spacecraft wide-angle camera. The view was obtained at a distance of approximately 1.2 million miles (1.9 million kilometers) from Saturn and at a sun-Saturn-spacecraft, or phase, angle of 71 degrees. Because the three images were of different resolutions, they were all projected to the same scale of about 89 miles (143 kilometers) per pixel.