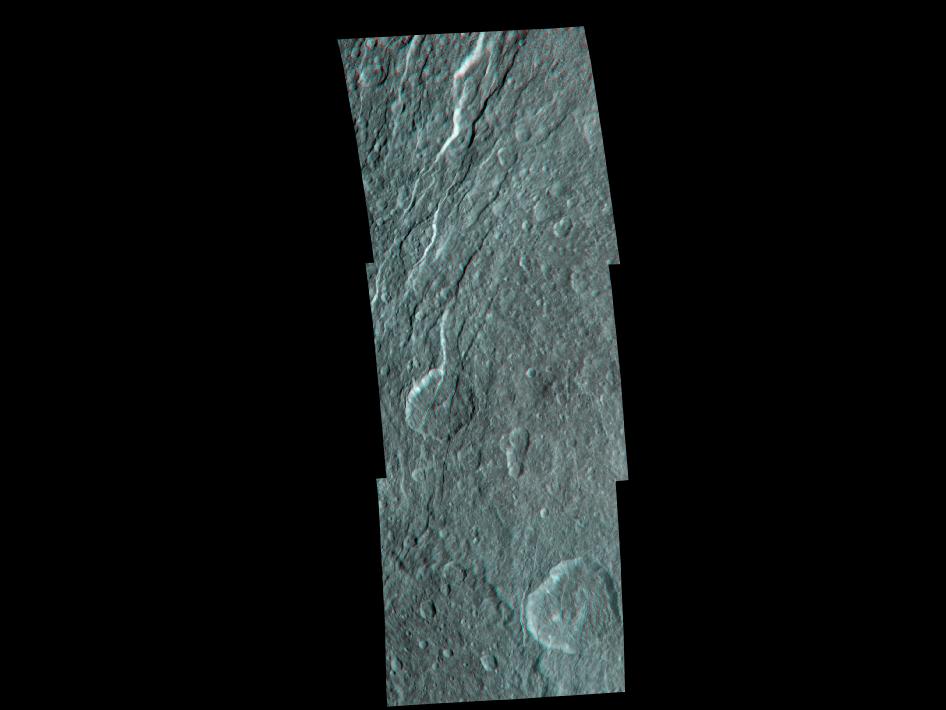 Wispy fractures cut through cratered terrain on Saturn's moon Rhea in this high resolution, 3-D image from NASA's Cassini spacecraft. The image shows a level of detail not seen previously.

Although Rhea's surface is mostly densely cratered, indicating little geologic evolution, the area depicted in this image tells a different story through evidence of tectonic activity. A set of closely spaced scarps and troughs that vary from linear to sinuous cuts through older, densely cratered plains. While the densely cratered plains imply that Rhea has not experienced much internally-driven activity since its early history, these imaging data suggest that tectonic stress has been active in more recent geologic times, at least in some regions. Troughs and other fault topography cut through the two largest craters in the scene, which have few smaller craters superimposed on them, indicating that these large craters are comparably young. The image also indicates the tectonic forms transecting the large craters' rims and floors are comparably young. The fractures seen here reach depths of as much as 4 kilometers (about 2.5 miles). In some places, material has moved down-slope along the scarps and accumulated on the flatter floors.

The images were projected to an orthographic map with a scale of 140 meters (460 feet) per pixel for both stereo partners. The anaglyph is centered at 12 degrees north latitude, 273 degrees west longitude. Terrain seen here is on the trailing hemisphere of Rhea (1,528 kilometers, 949 miles across). The images were taken in visible light with the Cassini spacecraft narrow-angle camera on Nov. 21, 2009. The view was obtained at a distance of approximately 25,000 kilometers (16,000 miles) from Rhea.