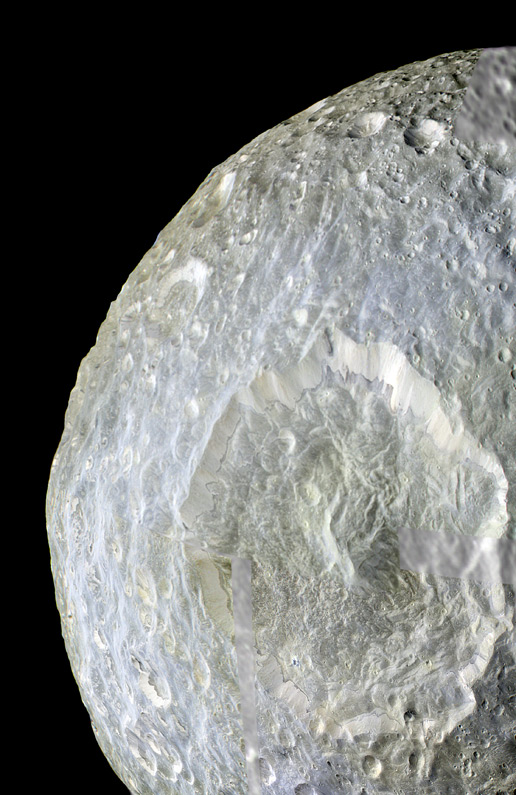 Subtle color differences on Saturn's moon Mimas are apparent in this false-color view of Herschel Crater captured by NASA's Cassini spacecraft during its closest-ever flyby of that moon.

The image shows terrain-dependent color variations, particularly the contrast between the bluish materials in and around Herschel Crater (130 kilometers, or 80 miles, wide) and the greenish cast on older, more heavily cratered terrain elsewhere. The origin of the color differences is not yet understood, but may be caused by subtle differences in the surface composition between the two terrains. False color images from Cassini's previous closest encounter, in 2005, also showed such variations (see PIA06257).

Herschel Crater covers most of the bottom of this image. To create this false-color view, ultraviolet, green and infrared images were combined into a single picture that exaggerates the color differences of terrain on the moon. These data were combined with a high-resolution image taken in visible light to provide the high-resolution information from the clear-filter image and the color information from the ultraviolet, green and infrared filter images.

The natural color of Mimas visible to the human eye may be a uniform gray or yellow color, but this mosaic has been contrast-enhanced and shows differences at other wavelengths of light.

During its closest-ever flyby on Feb. 13, 2010, Cassini came within about 9,500 kilometers (5,900 miles) of Mimas. This view looks toward the northern part of the hemisphere of Mimas that leads in the moon's orbit around Saturn. Mimas is 396 kilometers (246 miles) across. North on Mimas is up and rotated 12 degrees to the left.

The images were obtained with Cassini's narrow-angle camera on that day at a distance of approximately 16,000 kilometers (10,000 miles) from Mimas. The images were re-projected into an orthographic map projection. A black and white image, taken in visible light with the wide-angle camera, is used to fill in parts of the mosaic. Image scale is 90 meters (295 feet) per pixel.