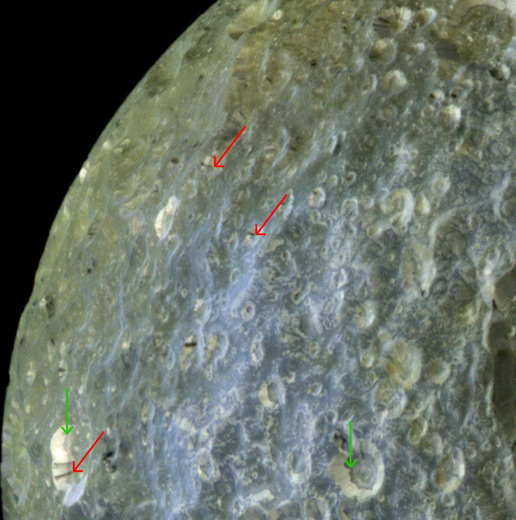 This false-color view of Saturn's moon Mimas from NASA's Cassini spacecraft accentuates terrain-dependent color differences and shows dark streaks running down the sides of some of the craters on the region of the moon that leads in its orbit around Saturn. The image was taken during Cassini's closest-ever flyby of the moon.

The false-color image shows how colors vary across the moon's surface, particularly the contrast between the bluish terrain on the right side of this view near Herschel Crater and greenish terrain elsewhere. The origin of the color differences (exaggerated by computer enhancement) is not yet understood, but may be caused by subtle differences in the surface composition between the two terrains. See PIA12572 and PIA06257 to learn more.

This image also shows dark streaks trailing down the sides of some craters (marked red in the annotated version), often originating from pockets of dark contaminants embedded just below the rim of the crater wall. The pockets likely represent small, pre-existing, dark-floored craters that were buried by the blanket of material thrown out from the newer impact that created the crater rim. The material from a newly exposed dark layer eventually moves downslope and forms a streak. Streaks sometimes are seen originating from the floors of smaller dark-floored craters perched along rims of larger craters.

The craters seen in this mosaic also show relatively dark markings along the lower portion of their crater walls (marked in green in the annotated version of the image). Cassini scientists interpret this darkening as evidence for the gradual concentration of impurities from evaporating icy materials in areas where the dark impurities slide slowly down the crater wall and the bright ice is baked away by the sun and the vacuum of space. For larger mosaics showing these features, see PIA12569 and PIA12568.

To create this false-color view, ultraviolet, green and infrared images were combined into a single picture that exaggerates the color differences of terrain on the moon. These data were combined with a high-resolution image taken in visible light to provide the high-resolution information from the clear filter image and the color information from the ultraviolet, green, and infrared filter images. The natural color of Mimas visible to the human eye may be a uniform gray or yellow color.

This view looks toward the area between the region that leads in Mimas' orbit around Saturn and the region of Mimas that faces away from Saturn. Mimas is 396 kilometers (246 miles) across. This view is centered on terrain at 11 degrees north latitude, 156 degrees west longitude. This mosaic combines images taken with the Cassini spacecraft narrow-angle camera on Feb. 13, 2010. The view was acquired at a distance of approximately 34,000 kilometers (21,000 miles) from Mimas. Image scale is 180 meters (590 feet) per pixel.