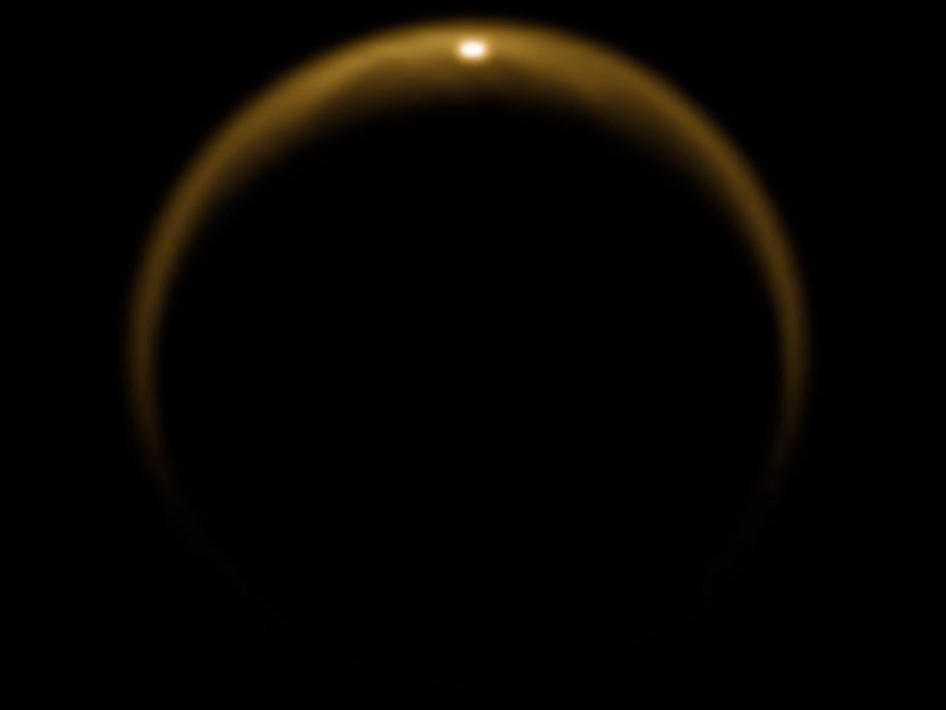 Reflection of Sunlight off Titan Lake

This image shows the first flash of sunlight reflected off a hydrocarbon lake on Saturn's moon Titan. The glint off a mirror-like surface is known as a specular reflection. This kind of glint was detected by the visual and infrared mapping spectrometer (VIMS) on NASA's Cassini spacecraft on July 8, 2009. It confirmed the presence of liquid in the moon's northern hemisphere, where lakes are more numerous and larger than those in the southern hemisphere. Scientists using VIMS had confirmed the presence of liquid in Ontario Lacus, the largest lake in the southern hemisphere, in 2008.

The northern hemisphere was shrouded in darkness for nearly 15 years, but the sun began to illuminate the area again as it approached its spring equinox in August 2009. VIMS was able to detect the glint as the viewing geometry changed. Titan's hazy atmosphere also scatters and absorbs many wavelengths of light, including most of the visible light spectrum. But the VIMS instrument enabled scientists to look for the glint in infrared wavelengths that were able to penetrate through the moon's atmosphere. This image was created using wavelengths of light in the 5 micron range.

By comparing the new image to radar and near-infrared light images acquired from 2006 to 2008, Cassini scientists were able to correlate the reflection to a lake, later named Jingpo Lacus, near the western shores of the sea known as Kraken Mare. Jingpo Lacus covers an area of 20,800 square kilometers (8,000 square miles). The reflection appeared to come from a part of the lake near 71 degrees north latitude and 337 degrees west longitude.

It was taken on Cassini's 59th flyby of Titan on July 8, 2009, at a distance of about 200,000 kilometers (120,000 miles). The image resolution was about 100 kilometers (60 miles) per pixel. Image processing was done at the German Aerospace Center in Berlin and the University of Arizona in Tucson.