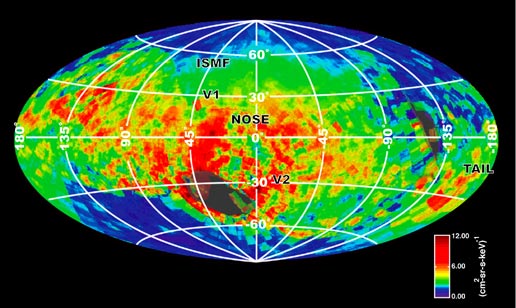 NASA's Cassini spacecraft created this image of the bubble around our solar system based on emissions of particles known as energetic neutral atoms. These particles are emitted from the boundary of the heliosphere, our sun's region of influence, as solar wind interacts with the interstellar medium. The solar wind, not shown, is a steady stream of particles emitted from our sun. The interstellar medium is the matter in between stars in our local corner of the Milky Way galaxy. Data for this map was captured by the Ion and Neutral Camera on Cassini's Magnetospheric Imaging Instrument between late 2003 and summer 2009.

This image shows high-energy particles in the 6 kilo-electron-volt range, with red indicating the hottest, most high-pressure regions and purple the coolest, lowest-pressure regions. The map was generated based on galactic coordinates, which centers the map around our sun and lines up the plane of our galaxy with the map's equator.

The label "nose" indicates the direction of the flow of interstellar plasma, or hot, ionized matter. The label "tail" indicates the view behind us. V1 and V2 indicate the locations of NASA's Voyager 1 and Voyager 2 spacecraft. "ISMF" denotes the estimated direction of the Interstellar Magnetic Field, which surrounds our solar system and pushes against the heliosphere at an angle. Some areas are colored gray to indicate incomplete coverage because of interference from the sun and Saturn.

The Cassini-Huygens mission is a cooperative project of NASA, the European Space Agency and the Italian Space Agency. NASA's Jet Propulsion Lab manages the mission for the Science Mission Directorate at NASA Headquarters in Washington. The Cassini orbiter and its two onboard cameras were designed, developed and assembled at JPL. The magnetospheric imaging instrument was designed, built and is operated by an international team led by the Applied Physics Laboratory of the Johns Hopkins University, Laurel, Md.

For more information about the Cassini-Huygens mission visit http://saturn.jpl.nasa.gov. The instrument team's homepage is at http://sd-www.jhuapl.edu/CASSINI/index.html.