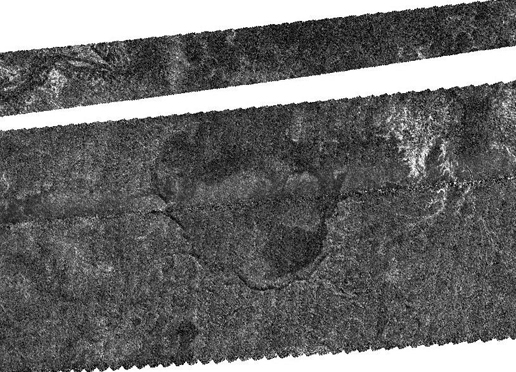 An enigmatic large basin appears in the south polar region of Saturn's moon Titan at the center of this Titan Radar Mapper image from NASA's Cassini spacecraft acquired on June 22, 2009.

Centered near 76.5 degrees south latitude, 213 degrees west longitude, the image covers an area of 190 by 140 kilometers (118 to 87 miles). The basin itself is 100 kilometers wide (62 miles). The radar illumination is from the left, and the incidence angle is about 45 degrees. The horizontal white stripe across the image near the top is a data gap in this preliminary version.

The basin has several possible origins. It may be a volcanic caldera, produced by collapse after cryovolcanic eruptions. It might be a modified impact basin, partially infilled with sedimentary material. Alternately, the basin may have formed by some other collapse process related to the presence of subsurface methane. Evidence for lakes elsewhere on Titan suggests that it might have been later partially filled with liquid methane and ethane.