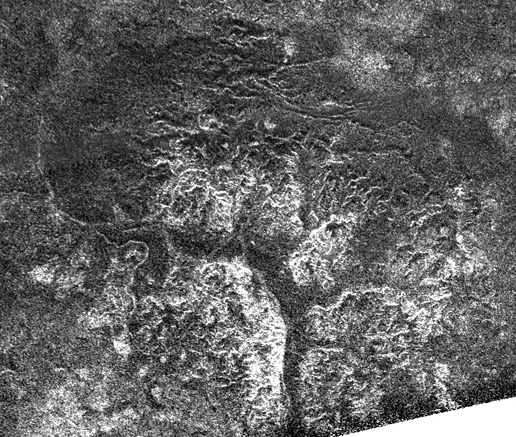 Complex and unique canyon systems appear to have been intricately carved into older terrain by the ample flow of liquid methane rivers on Saturn's moon Titan, as seen in this radar image taken by NASA's Cassini spacecraft on May 21, 2009.

The channels seen here indicate that fluids flowed from high plateaus on the right to lowland areas on the left. In the center of the image, the wide distribution of the channels' tributaries suggests that rainfall is effectively eroding the surface. The bright terrain toward the bottom of the image is interpreted as high cliffs and broken bedrock.

These canyon systems remind us that Titan is (or has recently been) a dynamic world with a complicated geological history. Multiple channels have flowed into a wide, dark arc in the center of this mountainous region. Here, the canyons appear to have been filled by fine-grained materials that appear dark (smooth) to Cassini's synthetic aperture radar. These canyon-filling materials were later carved by a large river channel that winds from the bottom left of the image toward the left center.

The image center is at 71 degrees south latitude, 240 degrees west longitude, and its dimensions are 335 by 289 kilometers (208 by 179 miles). The radar illuminated this area from the top of the image at 18 degrees incidence angle. The areas seen here are typical of other regions observed near Titan's south pole in other flybys (see PIA10018).

For more information about the Cassini-Huygens mission, visit http://saturn.jpl.nasa.gov/ .