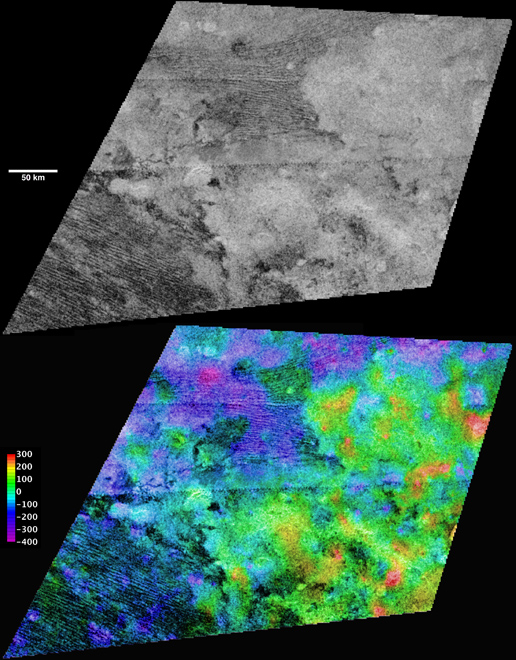 Cassini's radar mapper has obtained stereo views of close to 2 percent of Titan's surface during 19 flybys over the last five years. The process of making topographic maps from images is just getting started, but the results already reveal some of the diversity of Titan's geologic features.

These topographic maps show the equatorial "sand sea" called Belet, and include both dark dunes and lighter, dune-free areas. Individual dunes are not resolved but the largest can be measured and have a height of 100 to 150 meters (300 to 500 feet), consistent with past estimates. The light areas are elevated, and it appears that about 200 meters (600 feet) of relief-slightly more than the height of the dunes themselves-is sufficient to stop or divert the dunes.

The region shown here is centered near 9 degrees south latitude, 290 degrees west longitude, and is about 450 kilometers (280 miles) across. The maps are in equirectangular projection with north at the top. The images used for mapping were acquired during flybys on Oct. 28, 2005, and Dec. 12, 2006 (known as T8 and T21). The T8 image is shown in black and white at the top. It has a pixel spacing of 351 meters (about 1,200 feet). Below, the same image is shown with color coding to indicate elevations, as shown by the color bar at left. The total range of relief from purple (low) to red (high) is 700 meters (about 2,300 feet). Zero elevation corresponds to a distance of 2,575 kilometers (1,600 miles) from the center of Titan, which is approximately the average radius of the satellite.

For more information about the Cassini-Huygens mission visit http://saturn.jpl.nasa.gov/home/index.cfm. .