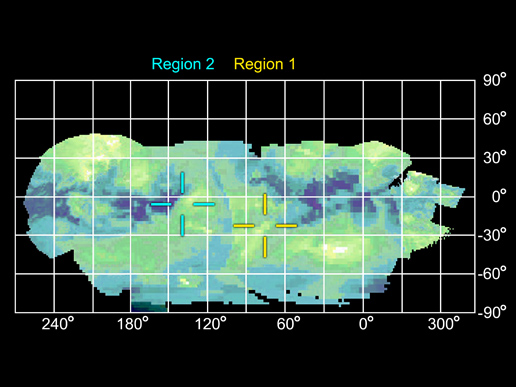 This infrared projection map of Titan was composed from images taken by NASA's Cassini spacecraft, visual and infrared mapping spectrometer. The location of two regions that changed in brightness are labeled. These regions are hypothesized by some to be areas of cryovolcanic activity on Titan.

Rather than erupting molten rock, it is theorized that the cryovolcanoes of Titan would erupt volatiles such as water, ammonia and methane. Scientists have suspected cryovolcanoes might be on Titan, and the Cassini mission has collected data on several previous passes of the moon that suggest their existence. Imagery of the moon has included a suspect haze hovering over flow-like surface formations, which are plausibly the result of icy volcanism.

Some Cassini scientists indicate that such volcanism could release methane from the interior, which explains Titan's seemingly continuous supply of fresh methane. Without replenishment, scientists say, Titan's original atmospheric methane should have been exhausted long ago.
This image is an overlay of all the high-resolution images from the first 45 flybys, up through last February 2007. The map was created using what 2.1 micron wavelength. Image scale is about 25 kilometers (16 miles) per pixel or 1.8 pixels per degree.
The Cassini-Huygens mission is a cooperative project of NASA, the European Space Agency and the Italian Space Agency. The Jet Propulsion Laboratory, a division of the California Institute of Technology in Pasadena, manages the mission for NASA's Science Mission Directorate, Washington, D.C. The Cassini orbiter was designed, developed and assembled at JPL. The Visual and Infrared Mapping Spectrometer team is based at the University of Arizona.

For more information about the Cassini-Huygens mission visit http://saturn.jpl.nasa.gov . The visual and infrared mapping spectrometer team homepage is at http://wwwvims.lpl.arizona.edu .
Credit: NASA/JPL/University of Arizona