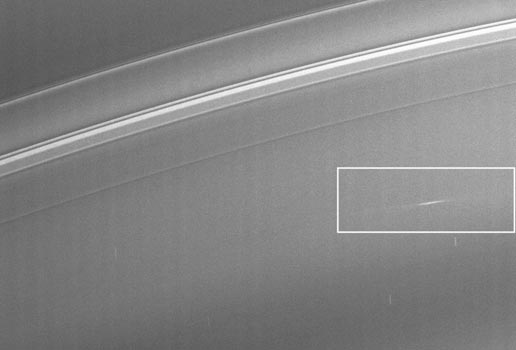 The bright streaks visible in these Cassini images taken during Saturn's August 2009 equinox are exciting evidence of a constant rain of interplanetary projectiles onto the planet's rings.

Objects, each estimated to be one meter (3 feet) in size and traveling tens of kilometers per second (tens of thousands of miles per hour), likely smashed into the rings and created elevated clouds of tiny particles that have been sheared out, or elongated and tilted, by orbital motion into bright streaks.

The image on the left shows an impact in the A ring. The streak stretches from the right of the image to the middle, and it does not quite follow the arc of the rings. The brightest part of that streak is 5,000 kilometers (3,100 miles) long (its azimuthal dimension) and 200 kilometers (120 miles) wide (its radial extent, tip to tip) in this image.

By the brightness and dimensions of the streaks, scientists estimate the impactor sizes at roughly one meter (3 feet), and the elapsed time since impact at one to two days. These equinox data lend more confidence to a Cassini imaging observation made in 2005 of similar streaks seen in the C ring (see PIA11675). All together, these observations constitute the visual confirmation of a long-held belief that bits of interplanetary debris continually rain down on Saturn's rings and contribute to the rings' erosion and evolution.

Although the phase angle of these images is not the best for seeing clouds of small particles, these ejecta clouds are easily seen because very little sunlight is falling on the rings during the exceedingly low sun-angle condition prevalent during the four days surrounding exact Saturn equinox. Exact equinox is when the sun is directly overhead at the equator. A cloud of dust rising above the dark ring plane is more directly catching the sun's rays, and is hence well lit and easily visible by contrast. When the ring background is at its usual brightness, impacts such as these are very difficult to detect.

The view of the A ring streak on the left looks toward the northern side of the rings from about 20 degrees above the ring plane. The image was taken in visible light with the Cassini spacecraft narrow-angle camera on Aug. 13, 2009. The view was obtained at a distance of approximately 1.2 million kilometers (746,000 miles) from Saturn and at a Sun-Saturn-spacecraft, or phase, angle of 87 degrees. Image scale is 7 kilometers (4 miles) per pixel.

The view of the C ring streak on the right looks toward the southern side of the rings from about 22 degrees below the ring plane. The image was taken in visible light with the Cassini spacecraft narrow-angle camera on Aug. 11, 2009. The view was obtained at a distance of approximately 263,000 kilometers (164,000 miles) from Saturn and at a Sun-Saturn-spacecraft, or phase, angle of 135 degrees. Image scale is 1 kilometer (4,007 feet) per pixel.